In their book "Making Climate Policy Work", our authors describe the obstacles that stand in the way of a serious carbon price policy - and why only a government industrial policy can lead to the goal.

For thirty years, nearly all the experts have agreed: the smartest and most cost-effective way to slow global warming is to put a price on carbon and other greenhouse gas emissions. After all, shifting the global economy away from fossil fuels will require trillions of dollars of investment. Markets can help ensure that resources at this scale are spent wisely.

As researchers steeped in the academic case for carbon pricing, we appreciate its underlying theory. But in our work with companies and governments on the front lines of change, we don’t see much evidence that the expert consensus is working in the real world — or that it ever will.

We set out to explain the disconnect between theory and practice in a recent book, Making Climate Policy Work. We wrote about the structural political barriers that impede adoption of serious carbon pricing policies, and we explained why government-led industrial policies and regulation fare better. Sure, there is a role for carbon pricing, but it is a relatively small one: to support more transformative industrial policy and regulation. 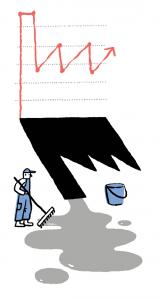 Although the economics of carbon pricing are elegant, the politics are ugly. Only in a few places, principally in Europe, do voters demonstrate a strong and reliable commitment to highly visible cost impacts on the energy they purchase. Examples of political fickleness abound, including the many efforts to roll back taxes on gasoline and other energy services in the wake of the current energy crisis. These grim politics make theorists unhappy, of course, but the reality is that political support for long-term climate policies is easier to hold together when costs aren’t splashed across newspaper headlines and at fuel pumps.

Second, expert theory counsels an “all-of-the-economy” approach so that every sector faces the same carbon price, and thus avoids potential economic inefficiency. A common carbon price ensures that no sector is forced to cut emissions that could be more cheaply reduced in another.

The reality is that every sector is different, especially in the early stages of a massive transformation. Some sectors are poised for rapid change, as demonstrated by the rise of renewable electricity and electric vehicles for personal transport. Others, like cement and steel, are at the very beginning of their journeys to clean futures and exposed to cut-throat competition in global commodity markets. A few industries, like electricity, are highly regulated and insulated from trade exposure, which makes it easier for them to bear higher costs. Still others are highly sensitive to consumer-facing energy prices, like transportation fuels.

Climate policymakers make their jobs much more difficult when they follow the carbon pricing consensus. Linking together sectors also expands the reach of political opponents, such that efforts that might be politically feasible in one sector get tethered to political limits found in the least progressive sector. In California, where we live, that’s exactly why our carbon pricing system doesn’t have much impact on emissions. Because the state’s carbon market covers transportation fuels, it creates politically sensitive cost impacts that are readily amplified by the state’s powerful oil and gas lobby. Oil politics make carbon politics harder to manage.

The state works around this problem by adopting much more ambitious, but less visible, sector-specific policies to clean up the grid and invest in electric vehicles. When California politicians talk about the state’s climate leadership, they talk about its economy-wide carbon market; when analysts look at what actually cuts pollution and boosts investment, they find sector-specific industrial policies.

Third, theory holds that getting started with carbon pricing inside nations offers a stepping stone to international carbon pricing and deeper global cooperation. That’s wrong. In very special places, like the EU, it has been possible to apply carbon pricing across borders — precisely because there are common EU legal procedures and expectations that a European-wide market will function reliably. None of those conditions exists anywhere else in the world. After three decades of elite policy advocacy, carbon pricing now applies to a fifth of global emissions but has resulted in only a global average price of about USD 3 per metric ton of CO2-equivalent; only about 4% of emissions are subject to prices in line with the Paris Agreement’s warming goals.

The expert consensus on carbon pricing has inspired many efforts that are elegant in theory yet bound to struggle in practice. Thankfully, most elected officials are no strangers to these dynamics, which is why they respond to political opportunities mainly with industrial policy and regulatory measures.

Look no further than the wake of Russia’s brutal invasion of Ukraine, which has made much more urgent the need to shake dependence on Russian oil and gas — and thus oil and gas altogether. Europe has responded admirably, not principally with carbon pricing but with a massive plan for long-term investment in direct alternatives like hydrogen and renewable natural gas alongside electrification and efficiency. Europe’s carbon market, the world’s best, will continue to play a supporting role that augments sector-specific policies and encourages cost-effective deployment of established low-carbon technologies.

The bad news about carbon pricing is actually good news for climate policy. It leads directly to strategic advice, already being followed to some extent and with little fanfare, that stands a better chance of halting global warming. Because real progress hinges less on markets and more on government, our work also suggests that governments’ skill and efficiency are essential. The leaders in this new, cleaner world will combine political support for action with sophisticated government capabilities needed to orchestrate a sector-by-sector strategy. Europe probably fares better in that world than the United States.

Even in Europe, though, it is essential to focus on what is really transforming economies — industrial policy, not marginal market signals. That’s important because in climate change what matters isn’t as much what any political system does on its own as much as what can be replicated more widely to affect global emissions.

David G. Victor is Professor of Innovation and Public Policy at the University of California, San Diego, and Non-Resident Senior Fellow at the Brookings Institution.

This is a translation of a text first published in the magazine Böll.Thema 50 years of international environmental policy.