Abortion rights in the United States: The end of Roe v. Wade

On Monday night, a surprise draft ruling by conservative Justice Samuel Alito was released in the U.S. indicating that a majority on the Supreme Court wants to reverse the legalization of abortions. Ella Müller, director of the Democracy Program at the Heinrich-Böll-Stiftung Washington, DC, puts this impending caesura and the political developments behind it in context.

What would overturning Roe v. Wade mean for the rights of women and pregnant people in the United States?

First, it is important to understand the legal reasoning behind the ruling in Roe v. Wade in order to appreciate its significance: The 1973 ruling explicitly establishes an unrestricted right to abortion. It was not until much later - in the early 1990s - that this right was modified and abortions were again regulated in a more restrictive manner. The judges based their decision in the 1970s on a right to privacy and thus further extended a legal umbrella for numerous areas of private life that the individual states had traditionally fiercely regulated; for example, by making inter-racial or same-sex marriages illegal or prohibiting heterosexual married couples from accessing contraceptives. It wasn't until the federal government protected privacy from state intrusion that women were granted the ability to control their own bodies in the early 1970s.

Supreme Court Justice Samuel Alito's decision, now released, would destroy that protective umbrella after five decades and opens the doors to all those political forces that want to massively interfere in the private lives of women and other traditionally marginalized people.

What does this mean specifically for people who want to end a pregnancy?

In a total of 26 Republican-governed individual states, laws have already been passed or largely prepared that criminalize abortions even in cases of abuse or incest. In Texas criminal laws are already in place to prosecute abortions after 6 weeks of pregnancy, and in Alabama medical personnel who perform abortions are to be punished with life imprisonment. This draconian practice is legitimized by the Supreme Court's ruling, as it now appears.

In states governed by Democrats, abortions will continue to be available - but here, too, access to clinics has been made difficult for years by Christian fundamentalist groups, and people seeking support or offering help have been intimidated, harassed, and persecuted.

People who are already being prosecuted for abortions in their home states, or will be in the near future, are forced to seek help in other states. This requires resources: time and money, access to information, but also physical and mental strength, emotional support, and, above all, private autonomy (the possibility, for example, of staying away from school or the workplace in a self-determined way, etc.). None of this can be taken for granted. Being able to determine one's own body in the future in the USA thus depends on numerous privileges that the economically weak, marginalized people, or women in patriarchal family situations do not have. Plus: It is not at all impossible that people will be prosecuted in their home states for abortions that have taken place outside the state’s borders - the law in Texas, for example, already provides for this.

How will American civil society react to this decision? Will there be protests, and what can be done?

I hope so, and in fact, demonstrations are already underway in front of the U.S. Supreme Court and in front of numerous state legislatures across the United States. The horror and anger over this draft ruling is great.

But mobilizing the liberal camp is difficult when your own party is the president and holds the majority in both chambers of Congress. Against whom should the protests in the streets be directed? Against the Supreme Court, on whose composition the American citizens have only indirect influence? Against the Republicans, who are in opposition in Washington? Successful protest needs a direction and a target.  Now there are signs that the anger and disappointment about this unchecked dismantling of democracy is increasingly being directed against the political leadership of the Democrats.

The most recent mass protests in the U.S. were the Women's March in January 2017 immediately following Donald Trump's inauguration and the anti-racist protests in response to the murder of George Floyd in the summer of 2020, when large numbers of white people joined the #BlackLivesMatter movement for the first time. Progressive America was in resistance during the Trump era, protesting and eventually electing a new president.

The political situation is different today: The power needed to defend the basic rights of all Americans cannot come from the streets alone at this moment - the responsibility lies with Democratic Party leadership. But it's a problem that too many influential Democrats continue to cling to the belief that the threat to American democracy comes from Trump alone and not from the conservative movement as a whole. The last 1.5 years have shown that a slight party-political majority alone is not enough to secure American democracy: it requires larger majorities and, above all, the unconditional political will to push through structural reforms.

There are - fortunately - a number of strategies and concrete measures that can and must be taken to protect fundamental civil rights, including the right to vote as well as Supreme Court reform and modification of the filibuster - to name just two steps that have long been discussed and that can only be implemented as long as Democrats still hold the majority in Congress.

The Roe v. Wade case was decided in 1973, almost 50 years ago. How could it happen that a constitutional right could suddenly be taken away?

There are long-term political shifts and unplanned events that have interacted to lead to this decision. The most important historical development is the politicization and de-liberalization of the Christian Right beginning in the 1970s. As late as the 1950s, most evangelicals thought the fight against contraceptives and abortions was the province of Catholics. It was Ronald Reagan who finally incorporated the fight against Roe v. Wade into the Republican Party platform in the mid-1980s, securing the votes of the radicalized Christian Right. Since then, the GOP and conservative organizations like the Federalist Society have made no secret of their desire to undo the liberalizations of the 60s and 70s. Under Trump, the conservative movement has massively expanded its influence on the judicial system at all levels and made the fight against women's self-determination an important hiring criterion.

And there are political mistakes and coincidences that make a decision like Alito's possible: The 2016 Obama administration's inability to fill the late Scalia's Supreme Court seat; the death of Ruth Bader Ginsburg; and the appointment of Amy Coney Barrett in the fall of 2021. Trump has refilled three Supreme Court seats with radical Christian conservative justices, shifting the balance of power on the Supreme Court to the right for decades to come - only fundamental reforms can stop the dismantling of civil liberties and democracy now.

Supreme Court Justice Samuel Alito wrote in his ruling that the “right to abortion is not deeply rooted in the Nation’s history and traditions." The legalization of same-sex marriage was also decided by the Supreme Court and followed similar legal logic as Roe v. Wade in Obergefell v. Hodges.  Alito also claims that overturning Roe has no consequences for other fundamental rights. Should we still expect conservative justices to revoke other rights, such as marriage for all?

Two things should be distinguished here: First, it is true that Alito actually legitimizes the withdrawal of the right to privacy with the protection of "unborn life" and points out in his denial that this does not apply accordingly in other areas such as same-sex marriage.

But the argument that something is not deeply rooted in American history and culture, and therefore illegitimate, is explicitly applied by Alito in his reasoning to progressive achievements like same-sex marriage. This argument, shared by a majority of Supreme Court justices, is politically reactionary, argumentatively arbitrary, and above all, fundamentalist in its claim.

Here he is in agreement with Republican Party opinion leaders, who just underscored this position again at the Ketanji Brown Jackson hearings: The political goal is to restore the traditional political and cultural balance of power from before the Civil Rights era. "If Roe falls, it's hard to see what else will stand still," wrote law professor Kimberly Wehle 2021 im Atlantic - and I think she's right. One cannot underestimate the fundamentalism of the conservative movement in the US. 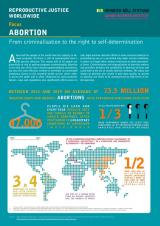 Abortion: From criminalisation to the right to self-determination

Abortion is one of the most common gynecological procedures. Legal regulations have a major impact on whether access to this essential healthcare service is safe, legal and free of charge.

150 years of Germany’s abortion ban ‒ when will the “green tide” wash over to the other side of the Atlantic?

Commentary
The “marea verde” – the “green tide” – has spread across the whole of Latin America. Can it make waves in Germany too?

A transatlantic climate alliance? A closer look at the tensions between European and US approaches to climate policy

Analysis
A different policy mix of climate protection in the U.S. and EU creates tensions that make a close alliance very difficult. The deep political divide in the U.S. also raises doubts about the durability of climate policy cooperation.
By Jörg Haas