The peace process in Afghanistan: Perceptions of the people

Summary of the online debate „The peace process in Afghanistan: Perceptions of the people“ of 11 November 2020 with representatives of Afghan civil society, Afghan media, the Afghan government delegation to the peace negotiations in Doha and the German Foreign Office.

After years of war and violent conflict, the year 2019 saw the beginning of the negotiations between the US and the Taliban about the withdrawal of international troops and security agreements of the Taliban. An agreement between the two sides of the conflict was signed in February 2020 in Doha and was supposed to lead to Intra Afghan Peace Negotiations. After long delays, the peace negotiations between a government delegation and a delegation of the Taliban began on September 12, 2020 in Doha.

The peace negotiations between the delegations of the Afghan government and the Taliban are extremely difficult for various reason. It is not only the fundamentally different views of both sides concerning the future of the country as republic or a religious state, but also the framework in which the talks take place. The agreement between the US and the Taliban, which was signed in February 2020, provides a very difficult basis for the peace negotiations. The Taliban gained recognition and the concrete agreements provided a number of incentives to start the negotiations, but not to reach agreements with the Afghan government. Moreover, the Taliban agreed only to stop attacks on the international troops but not against the government and civil population. Consequently, they have been using violence in the last months to demonstrate their strengths and the number of casualties increased tremendously. Another difficulty is the regional dimension, i.e., it is not solely an internal conflict but neighbouring countries use the war in Afghanistan for their respective interests.

Thus the peace negotiations had a very difficult start and after more than two months there are no tangible achievements to be reported. The slow progress is however understandable given those difficult circumstances and there is still hope that the negotiations can reach a phase in which the substantial questions on the future of the country will be discussed.

There are views that the Taliban have not changed much in their approach to a democratic society and particularly with regard to human and women rights since 2002. But the role of women has changed tremendously in the last 20 years. Women take active part in the political and economic life. There are e.g. more than 2.000 women working in the media, they attend universities and work in other spheres of life. The negotiations so far have revealed the there is a gap between changed realities achieved during the last years particularly in the field of women rights and women education and employment and the traditional views of the Taliban. The official but also the informal talks can be used to overcome this gap and contribute to a more realistic approach on the side of the Taliban. An important argument in this context could be the role women play in other Muslim countries, like for instance Qatar, which is hosting Taliban and organised the first round of negotiations.

Despite all the difference, it was also seen as a big achievement that the negotiations have started at all and that both sides are talking to each other. It is a historic moment in the long history of war and violence of Afghanistan and there seems to be a big consensus in society that a political solution needs to be found.

The German government is supporting the peace process on request of both sides. The Taliban are aware that Germany is not neutral, it supports the Afghan government with military and development aid and has clear positions when it comes to questions of human and women rights and the rule of law. Still representatives of the German government talk to both sides and thus try to bring the process forward and will continue doing so as long as both sides are interested.

Neighbouring countries play a very distinct role in the conflict and thus need to be integrated into to peace process. At the moment we see a lose-lose situation. The Afghan people are suffering from the conflict but also neighbouring countries development is hampered since trade and economic cooperation are limited. This lose-lose situation should be the starting point to get more support for a political solution by the neighbours of Afghanistan.

People Perception on the peace process

Based on the fact that the legitimacy of the current government is low, due to very low turnout in the last elections in September 2019, there is the concern that the expectations of the people are not really taken care of in the negotiations.

In order to get a better understanding of the interest of the people the Salah Foundation, a consortium of 7 civil society organisations, conducted a survey “People’s Perceptions on the Peace Process Afghanistan” among more than 6.000 people in all provinces in the country from December 2019 to January 2020. The findings of this survey have been published in March 2020.

The study looked at five areas to understand the perception of the people. (a) The main barriers to sustainable peace are seen in ISIS and the role of neighbouring countries. Youth are joining the armed groups more for economic reason (28%) than for ideological reasons (11%). (b) The respondents see high political will to reach peace in the government (79%) but also with the Taliban (63%). (c) People feel best represented in the peace talks by the government (39%) but see also a relative strong role for victim’s representatives (15%) and civil society organisations (13%). (d) Concerning strategy and contents the most important issues for the people are ceasefire and end of war (33%), women rights (15%) and sustainable peace (9%). (e) Asking about the key actors in the peace process, there are high expectations towards the neighbouring countries to support the peace process and also international organisations but there is also a high motivation to do something for peace themselves.

The study but also observations from town hall meetings – conducted by civil society organisations - show very clearly that there are a lot of similarities between the views of the rural and urban population. Since violence and attacks have increased in recent months’ people from rural and urban areas are primarily asking for a ceasefire and an end of violence. But of course there are also differences e.g. urban population is more concerned about access to education and human rights.

A very concrete feedback came from the province Balkh. There the people celebrated the start of the negotiations since they had high hopes. This positive mood changed however quickly with the increasing violence by the armed groups since the beginning of the negotiations. An important observation is that a political peace will not be enough, it will also need economic and social improvements to let peace last. The speaker from Balkh reported about clear priorities for the negotiations of the people: they favour the republic and the current political structure, they want to defend the rights of women and stop the negative influence of neighbouring countries.

A more institutionalised initiative is the “Afghan Mechanism for Inclusive Peace” (AMIP), which tries to transfer the views from the people, think tanks and civil society organisations to the official negotiation process. The main idea behind this initiative is, that a sustainable peace can only be reached if all groups in society are somehow included in the process. AMIP is an open, accessible, Afghan-driven mechanism that will provide a structured, neutral and non-partisan way for the Afghan public to play an active and central role in building a significantly more inclusive peace process. It is planned that AMIP shall have a very active role, when the peace negotiations will be continued in the future. 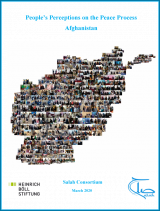 The Salah Consortium, a consortium of 6 Afghan civil society organisations, conducted a survey in order to give ordinary Afghans a voice in the peace process and to learn about their expectations. Responses of the survey show, that the people perceive a more prominent role for civil society, tribal elders and other members of society, while the current process is largely driven by foreigners and the Afghan political elite.

Scenarios for Justice: ICC investigates the situation in Afghanistan

Report
From December 4-6, 2019 the International Criminal Court organized a series of hearings on alleged war crimes in Afghanistan. In April 2019, the pre-Trial Chamber II of the court unprecedentedly denied the request of the court’s prosecutor for authorising an investigation.
By Abdul Wahed Zia Moballegh

“There is so much more the world should know about Afghanistan”

Interview
Omaid Sharifi is a pioneer Afghan activist and one of the co-founders of ArtLords, an artist association which has been attracting widespread international attention in recent years.
By Lin Xin and Luzie Mayer