Gene drives: Who decides for Hawai’i and beyond?

At this year's World Conservation Congress in Hawai'i ethical and social concerns about the use of a controversial synthetic biology technology were raised: gene drives. This genetic engineering technique has the ability to change the world we know.

Imagine that by adding one mosquito into a population, you could cause extinction of that mosquito species, or that by releasing genetically engineered mice onto an island, you could fully eradicate that species of mouse once and for all. To some, these “genetic extinction” proposals could be “silver bullet” tools for conservation. However, many leading scientists and conservationists have expressed concern that the use of this new, understudied, unregulated and dangerous new technique, known as “gene drives”, is not appropriate for conservation or other environmental uses and could result in far more harm than benefit.

The day before the International Union for the Conservation of Nature (IUCN) World Conservation Congress commenced in Hawai’i, Friends of the Earth and ETC Group released an open letter signed by 30 international conservation and environmental leaders, including Dr. Jane Goodall, genetics professor and broadcaster Dr. David Suzuki, Dr. Fritjof Capra, entomologist Dr. Angelika Hilbeck, Indian environmental activist Dr. Vandana Shiva, biologist Nell Newman and Barbara Unmüßig of the Heinrich Böll Foundation, stating that “gene drives, which have not been tested for unintended consequences, nor fully evaluated for ethical and social impacts, should not be promoted as conservation tools.”

Coincidentally, this open letter was released at the same time that the IUCN announced its adoption of a de facto moratorium on supporting or endorsing research into gene drives for conservation until the IUCN has fully assessed their impacts. This news received widespread coverage in outlets including Agence France Press, Washington Post, Christian Science Monitor, Technology Review and Project Syndicate.

It was here at the 2016 World Conservation Congress in Oahu, Hawai’i, that Friends of the Earth U.S., ETC Group, members of Hawaii SEED and others were able to amplify our concerns about the use of gene drives, a controversial new synthetic biology technology that could be used to deliberately cause targeted species to go extinct. This genetic engineering technique could ultimately give biotech companies the ability to intervene directly in evolution, to drastically and permanently alter entire ecosystems, and drive entire species to extinction.

On September 5th, Friends of the Earth and our allies led an IUCN event to raise awareness about these and other hazards of gene drives. The opinions of attendees ran the full spectrum - while many were not sure that gene drives would cause more harm than good, there was agreement that gene drive projects should be transparent and conducted in consultation with communities. Unfortunately, we discovered that a group of gene drive promoters were attending a closed-door meeting to discuss gene drive proposals for Hawai’i the very next day.

The following day, Hawai’i SEED, a local coalition, hosted a meeting with leaders from the indigenous, food sovereignty and local conservation movements. The meeting not only introduced concerns about the gene drive proposals for Hawai’i, but also focused on the question of “who decides for Hawai’i” along with the importance of community driven solutions and public dialogue. Journalist and lawyer Claire Hope Cummings and leading Native Hawaiian activist Walter Ritte opened the panel, followed by local indigenous lawyer Hokolei Lindsay, Jim Thomas from ETC Group and myself, Dana Perls, from Friends of the Earth U.S.. The meeting kick started a robust discussion about actions that people could take as a movement to protect the biodiversity in Hawai’i, and how to defend Hawaiians’ right to decide what those mechanisms should and shouldn’t be.

The narrative around gene drives and synthetic biology remains fraught with biotech industry hype, but the conversation is changing. Concerns about whether we should use powerful genetic extinction technologies like gene drives, and the importance of engaging the public in the decisions about how to appropriately conserve biodiversity, are getting louder. This conversation will continue on multiple fronts, including the next round of negotiations of the UN Convention on Biodiversity in Cancun, Mexico this December. From international environmental leaders and scientists to local indigenous activists, the people’s movement to promote responsible, transparent and just solutions and protect the wellbeing of people and the environment over the profits of a handful of biotechnology companies is growing stronger.

This article is part of our dossier "Synthetic Biology".

Dossier
Synthetic Biology describes a set of new genetic techniques for designing and engineering lifeforms for industrial purposes. So far, there is neither a public debate worth mentioning nor any regulation by law. Our dossier looks at the risks Synthetic Biology poses for the conservation and sustainable use of biodiversity.

A Bad Bet on Synthetic Biology

Las Vegas seems to be an apt place to launch a risky corporate gamble that could destroy the livelihoods of millions of small-scale farmers.
By Silvia Ribeiro and Jim Thomas 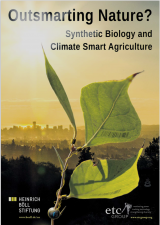 Many of the world's largest agro-industrial corporations are pushing forward the poorly-defined idea of "Climate-Smart Agriculture"(CSA) to re-market industrial agriculture as 'climate-ready'. This report uncovers how some advocates of CSA are embracing the extreme genetic engineering tools of synthetic biology ("Syn Bio") to develop a set of false solutions to the climate crisis. 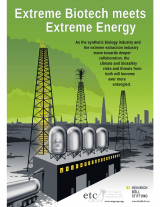 The extreme genetic engineering industry of Synthetic Biology (Syn Bio) is shrugging off earlier pretensions that it would usher in a clean, green ’post-petroleum’ economy. Now they are partnering with big oil, coal, gas and mining interests. This report details this emerging fossilbiotech alliance.