The Carbon Levy Project is working to introduce a global fossil fuel extraction levy to ensure that the people facing the worst impacts of climate change are compensated by those that caused the problem. In Paris, the Carbon Levy Declaration has been signed by many supporters from around the world, among them Barbara Unmüßig.

Leaving Paris we will push for more ambitious climate action, and to ensure that the most vulnerable are supported in facing the worst impacts of climate change – a problem they had no part in creating.

We will therefore work to introduce a global fossil fuel extraction levy (the Carbon Levy) to ensure that the people facing the worst impacts of climate change are compensated by those that caused the problem.

We support work by allies on legal strategies to bring the fossil fuel industry to account for the damage their product is causing.  And it is crucial to ensure that fossil fuels are phased out and replaced by renewable energy by mid century.

We encourage you to join us.

90 oil, gas &amp; coal producers are responsible for two thirds of our CO2 emissions in the atmosphere. It’s time to make them pay for their climate damage. 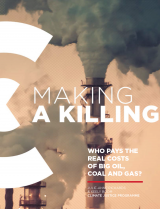 Climate change is already here. With less than 1°C of global warming, the impacts of climate change are already severe on the world’s poorest and most vulnerable people. The report is released by the Carbon Levy Project and outlines several cases where developing countries have suffered real loss and damage from climate change impacts.