“South Africa has the negotiating capacity”

South Africa is highly dependent on coal but also considered a leader on climate policy. How does it look at the upcoming climate summit in Paris? An interview with Richard Worthington.

Heinrich-Böll-Stiftung: South Africa is highly dependent on coal but also considered a leader on climate policy in the international arena - how do these two things go together?

Richard Worthington: SA climate policy has been strongly influenced by an enthusiasm for multilateralism in the early years of democracy (coinciding with the early years of the UNFCCC), backed by an understanding that the national capacity to respond to climate change dependent upon effective global response. This understanding recognises heavy domestic reliance on coal and sees the prospects for reducing carbon-intensity of the SA economy as dependent upon international progress in this regard. Thus leadership pursuant of effective global governance supporting both mitigation and adaptation is a logical response to coal dependence - particularly with perceptions that renewable energy options are “too expensive”, which have only recently begun to wane. Thus international climate policy has been prioritised over domestic climate change response and is treated as a prerequisite for significantly reducing both emissions and dependence on coal.

The tensions between leadership in international climate change response policy and positioning and enduring dependence on coal have largely been masked by rhetorical commitments, which are either too vague to drive domestic action, or have been ignored (as was the case with a 2002 commitment by Eskom, at the World Summit on Sustainable Development, to reduce coal dependence by 10 percent - of which not even 1 percent was achieved). The 2009 Copenhagen commitment was carefully articulated to convey mitigation ambition and leadership, but tabled numbers with no firm foundation or specific substance, such that the current interpretation, as contained in the Intended Nationally Determined Contribution document, is far less well-regarded than the original pledge with which it is purportedly consistent.

Another dimension of high dependence on coal, or more precisely of the high level of emissions arising from the structure of the economy (embedded in long term infrastructure and investment portfolios) is the de facto leverage this affords in negotiations, which is manifestly more impactful than moral argument. When considering, however indirectly, the apportionment of a global common good (the carbon-cycling capacity of the biosphere), existing appropriation carries more weight than hypothetical entitlement. While this is a dynamic that negotiating parties claim or even aspire to rise above, it constitutes a powerful paradox for moving from negotiating to a binding agreement, which necessarily involves parties relinquishing such leverage.

Leadership in development of international climate policy and means of implementation is reinforced by being a major emitter, at least as long as other parties believe the prospective leader is ready and willing to embark upon the rate of change implied by their stated positions. Recent success in introducing renewable energy in electricity supply has helped to sustain such a belief regarding South Africa, supported by reduced emissions growth (even if it occurred for the wrong reasons). Exercising leadership amongst developing nations and particularly within the Africa Group is more a product of domestic resources and technical and negotiating capacity, aided by willingness to stand up to industrialised nations.

The negotiation track culminating at COP 21 was launched 2011 at the climate change conference in Durban - how does South Africa look at the upcoming conference in Paris and how has the debate changed in the country in the last couple of years?

I think the most significant shift – in thinking rather than in public debate or positioning – is from questioning whether the science is sufficiently conclusive to merit transformative change, directed by government intervention, to questioning whether a goal of staying below two degrees average global warming is feasible or ‘realistic’. While SA still has a few climate change denialists enjoying extensive exposure, open-minded scepticism has shifted from the findings of the IPCC, or climate science, to the proposition of phasing out fossil fuels. There is also a new form of denialism asserting that renewable energy does not have the potential to meet the energy needs of humanity, or of modern industrialised society.

Frankly, national debate about climate change and particularly the domestic response has not progressed substantively in recent years, though there has been progress in getting to grips with adaptation challenges and deepening understanding of the likely impacts. There was something of a hiatus on climate change following COP17 in Durban, preparation for which had fostered a superficial sense of common purpose and a political correctness, which was somewhat transferred to the Durban Platform negotiations track, through invoking a sense of national accomplishment. This did not translate into common purpose or even constructive engagement when the specifics of appropriate national mitigation ambition were addressed directly, but government did not bring such contestation into the public domain.

There has been no significant progress on elaborating climate change mitigation policy at the national level since adoption of the policy White Paper in2011 and the objectives set for the first two years have not been met. Deliberation of the Desired Emissions Reduction Outcomes (DEROs) reached an impasse before mid-year and is effectively on hold until after COP21. Climate change as a leading national issue has been significantly over-shadowed by an electricity supply crisis, but there have been no formal outputs of on-going energy planning processes since the 2010 Integrated Resource Plan for electricity supply.

National Treasury appears resolute regarding introduction of a carbon tax in 2016, despite concerted opposition from business, industry and mainstream economists, and draft legislation to this end has just been published. Proposals for the carbon tax rate to escalate after its introduction have been weakened and it seems likely that it will be introduced at a nominal rate, as a signal of long-term intent rather, and perhaps as a means of introducing carbon crediting. Most of government seems to have settled into treating ‘the green economy’ as an add-on to a broader economy that cannot accomplish, or cannot afford, disruptive change.

Paris is increasingly seen as a watershed test of whether the UNFCCC system can give meaningful effect to the principle of equity and the generic commitments to support by Annex 1 countries - COP21 is for many the last chance to salvage the credibility of the Framework Convention and multilateral negotiations on climate change. The outcome will be assessed as a culmination of the process launched in 2011 in Durban, rather than another step, and South Africa has signalled that it is among the developing countries that are prepared to reject a proposed agreement that is not balanced or equitable.

Growing awareness of global tax avoidance and illicit financial flows is putting the modest scale of finance under the UNFCCC into perspective. Developments in the energy sector, most particularly the shift in relative costs of renewable energy technologies have done more to enable reducing dependence on fossil fuels than anything emanating from climate change negotiations. Amongst South Africans paying attention to climate change or global governance, many already see the multilateral process as at best potentially helpful, rather than as pivotal.

Rejection of social license claimed by the coal industry, usually in the name of poverty alleviation or economic growth, is being driven by more immediate adverse impacts than climate change. South Africa is not at the forefront of this global trend, but is catching up, particularly in light of escalating water availability challenges and growing impacts of mining on water quality. For a growing number of civil society organisations the UNFCCC process serves a legitimising role for the enemies of environmental justice, or a just transition to sustainable energy, such that the intentions or sincerity of individual governments are not really relevant to the over-all impact.

From a different perspective but with potentially similar effect, there is a growing body of opinion amongst business and industry and some parts of government, that support for an international agreement and/or for keeping warming below 2 degrees is something of a charade, which is maintained because no party is prepared to be the one to break ranks – the core belief being that this goal is not realistic and that South Africa would on balance be disadvantaged if government actually pursues it. A variation on this is that much of government and civil society are sincere but deluded and that there is an imminent danger of government wrecking the economy by actively pursuing effective climate change response.

What does South Africa bring to the table in Paris?

There is nothing really new, but some fairly generic positive attributes that South Africa as a ‘Party’ will bring to Paris:

The most substantive evolution of SA positioning is increasing emphasis on achieving operational parity for adaptation, as the key to attaining some measure of equity within an international agreement, on which SA seems to have strong resolve. This is largely in response to efforts to reduce the agreement to little more than a set of mitigation pledges, and is allied to the issue of finance, which is considered the main indicator of the recognition of primary responsibility on the part of the biggest polluters, in the context of inadequate ambition on mitigation.

South Africa negotiates as part of the Africa Group but is also a member of BRICS - are there potential conflicts of interest?

The potential for conflicting interests is no greater than the potential for reconciling contending interests and the latter is arguably much greater, given on-going globalisation of capital and commodities (raw resource) markets and the concentration of resources in Africa. The central conflict of interests in addressing climate change is between the present and the future, between short-term and long-term outcomes, and between the status quo and new forms of organisation and governance that are required in our times of accelerating change, but have yet to emerge.

South Africa has an obvious and growing interest in being accepted within an African collective and recognised as an honest broker of African interests amongst the dominant economies/ countries, as well as a pragmatic interest in seeing neighbouring countries improving prospects for their people. South Africa has invested significantly in strengthening the African Union and initiatives such as NEPAD (New Partnership for African Development) and supports a collective African approach under the Forum on China and Africa Cooperation (FOCAC).

Given South Africa’s active participation within the G77&China group, including efforts to facilitate common positioning and collective strategy, membership of BRICS is not highly significant to climate change negotiations, particularly if they are taken at face value. ‘The world in one country’ is not just a slogan to promote tourism, it also conveys the diversity of interests within our most unequal of countries. While all countries face challenges of contending interests at the national level and between national and regional interests, few constitute such a comprehensive microcosm of the interests contending at the global level, thus few have greater potential to help facilitate an acceptable compromise.

This interview is part of our dossier on the climate summit in Paris (COP21). Read Richard Worthington's analysis, if you want to learn more about climate change and energy politics in South Africa. 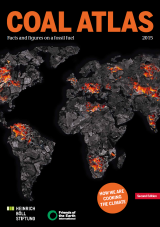