Climate, Energy and Resource Politics in the MENA Region

In the midst of turbulent times in the Middle East and North Africa, the State of Qatar is hosting the 18th Conference of the Parties (COP 18) to the United Nations Framework Convention on Climate Change (UNFCCC) in Doha from November 26 to December 7, 2012. This trilingual webdossier presents analysis and perspectives from a wide range of international and regional experts on how climate change, resource and energy politics relate to political and social change.

Energy and Resources in MENA

The “Doha Climate Gateway”: will the camel go through the eye of the needle?

Expectations for the climate summit in Doha were so low that it is quite remarkable that the meager results still managed to fall short of them. Many NGOs condemned the conference as a failure. The EU and Germany called it an important step in the right direction. A summary of the results of the climate conference in Doha.
By Lili Fuhr and Liane Schalatek

Urban Areas in the Arab Region: Time for Adaption to Climate Change

The interactions between natural risks in the Arab region, climate change effects, water scarcity, and lack of food self-sufficiency represent a serious challenge to policies and plans in Arab countries and cities. Over the last three years, climate-related disasters have cast their shadow on around 50 million people in the Arab region.
By Amal Dababseh

The Middle East and North Africa region is particularly vulnerable to climate change because of its already scarce water resources, the high levels of aridity, and the long coastal stretch. Adaptation to the impacts of climate change must start from now to build up the resilience of the affected countries and communities within.
By Nadim Farajallah

After spring comes? Recent development investments into the MENA region

In the wake of the Arab Spring, G8 countries and other nations have pledged major sums to stabilize the region. These financial and economic support packages could also fail to stabilize the region. Successfully managing the wide range of risks involved in the region requires addressing vulnerabilities directly in order to turn what will be a low-carbon and resource-constrained future from a risk into an opportunity.
By Sabrina Schulz

Qatar must be regarded as an established regional and international actor. It played a key role in supporting the Arab Spring movements and it is now hosting the UN climate summit COP18. Salman Shaikh gives an overview of Qatars ambitions and priorities.
By Salman Shaikh

Will Qatar Push for a Climate Spring?

Qatar, that faces many problems of climate change that many small island states do, has a golden opportunity to continue demonstrating leadership in the region beyond supporting the different revolutions. As the host of COP 18, Qatar should not only play the host but should also put climate change as the top political priority – now and in the future.
By Wael Hmaidan

Climate Change Policy in Israel Must Become a National Priority

The “startup nation” Israel that exports solar technology abroad and is famous for the early implementation of solar water heaters is failing to implement renewable energy sources at home. Public awareness is low and the government lacks a coherent strategy even though impacts already affect the country: African climate refugees seeking water, food and shelter.
By Maya Milrad-Givon

Insights from the COP 18

As traditionally, the Heinrich Böll Foundation was present at this years Conference of Partners with an observer delegation. Many members of the delegation came from Arab countries, trying to raise awareness about the importance of a climate conference hosted in the region. A small dossier on our MENA website features the experiences and perspectives of the delegates.

Bangkok Climate Talk 2012: On the Road to Repeat Copenhagen?

During the informal talks in Bangkok in last August, animosities between developed and emerging countries rose to the surface once more. While negotiations happened mostly behind closed doors, Asian farmers and fishermen are already reporting how climate change has impacted on their harvests and livelihoods. A reports on the meeting, which was supposed to pave the way for the COP 18.
By Sakhon Songma, Wanun Permpibul and Jost Pachaly

How Not to Get Lost in the Desert

In the middle of an economic crisis and with the need to fight poverty globally, it is pivotal for the participating states to take COP 18 in Doha to its limits. Despite low expectations of Qatar in hosting this climate summit and the inherited problems and challenges from previous summits, it is even more important to get participating states back into the game to agree on binding regulations to decrease CO2 emissions.
By Hans Verolme

What were the expectations for COP 17 in Durban in 2011 and what does it mean for COP 18? The climate summit was hosted 2011 by South Africa which is located in a region that stands to be tremendously affected by climate change. This year participants of the summit in Doha must find a solution for financing adaptation as well as making the Green Climate Fund operational.
By Kulthoum Omari

Young professionals from the Arab world met in October in Amman for a summer school program conducted by the Heinrich Böll Foundation. In inspiring lectures, several exeptional issues were highlighted, such as climate change and gender, new ways to visualize topics related to climate change, scarcity of water, and adaptation in the MENA region.
By Svenja Oberender

The Power of Youth for Environmental Justice

The Arab world has witnessed uprisings from its youth, who are demanding more democratic governance systems, and particularly social justice, which implies both economic and environmental justice. But those regimes remain unaware of the power of the youth, who can deliver solutions for climate change.
By Waleed Mahmoud Mansour

The Board of the Green Climate Fund met for the second time in Songdo, South Korea from October 18 – 20, 2012. With board members having to tackle the nitty-gritty work of operationalizing the Fund by early 2014 now in earnest, the selection of South Korea as the host country for the GCF was the most concrete outcome of the three day board meeting

Climate Finance for the Middle East and North Africa: Confronting the challenges of climate change

As Qatar prepares to host the 18th Conference of the Parties, global attention is turning to the issue of climate change in the Middle East and North African (MENA) countries. This brief considers the role of climate finance in the region. It is based on the Climate Funds Update (CFU) database monitoring the activities of 23 dedicated international climate finance initiatives, and complemented by desk research.

From Ignorance to Inclusion

Privatizing the Governance of “Green Growth”

Big transnational corporations do what they can to stick to and increase their power in the natural resources sector and promote that as “Green Growth”. How can civil society react to that? In their paper Nancy Alexander and Lili Fuhr analyse the state of the development and formulate questions for a debate.

Green Sins – How the Green Economy Became a Subject of Controversy

Large-scale wind farms and solar power plants are springing up everywhere one looks. That’s good for the climate, but small-scale farmers and the poor are becoming the pawns of hard-nosed business interests around the world.&#13;
By Barbara Unmüßig 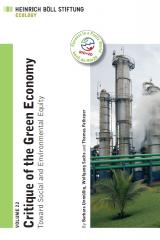 Critique of the Green Economy - Toward Social and Environmental Equity

Publication Series on Ecology 22: The idea of growth as the way to end poverty and escape economic and financial crisis remains largely undisputed and is currently reflected in the concept of the green economy. But not everything that is “green” and efficient is also environmentally sustainable and socially equitable. This essay outlines a policy of less, of wealth in moderation, to enable the Earth’s resources to make a life of dignity and without need possible for all.

The worldwide and sustainable transition of energy systems will only succeed if the economic and technological capacities of all countries are involved. Few developing countries have considerable production capacities for climate-friendly technologies. If the creation of attractive enabling environments in the global South goes hand in hand with new ways of careful export support in the global North, this will work as a global and fair Green New Deal.

Publication Series on Ecology 26: Natural resources are back on the agenda. This paper underlines a new dimension of international relations and pleads for new approaches, called international resource politics, which can be used for ongoing debates concerning green economy and transition strategies. 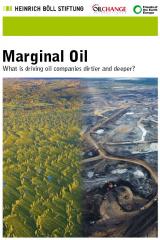 Marginal Oil: What is driving oil companies dirtier and deeper?

This paper is a document that describes the drivers behind marginal oil investments and gives an overview of existing and potential projects across the globe. It contains important analysis that should be public knowledge and will productively feed the ongoing debate, from Cancun to Durban to Rio and beyond.