A target for exploration and extraction

Madagascar is increasingly a target for extractives exploration and extraction.  Despite its unique eco-systems – the island is a biodiversity hotspot – extractive industries are regarded as one of the strategic pillars of the country’s future development. Former leader Marc Ravalomanana focused on encouraging international investment, which has continued albeit at a slower pace due to the country’s ongoing political turmoil.

Interest in tar sands is focused on the Bemolanga field in the Melaky region, near the West coast of the island. Extra heavy oil resources are also being explored at the neighbouring Tsimiroro field. Both fields are located on the country’s oldest know hydrocarbon deposit.

An independent estimate of the Tsimiroro field in 2009 showed it had 3.5 billion barrels in place, with 900 million barrels recoverable, slightly less than Madagascar’s Oil’s own estimate. The depth of the field, between 40 and 300 metres below the surface, means oil will need to be extracted through in situ steam-based production techniques (as in the Canadian tar sands), requiring significant water and energy resources.

The Bemolanga field is estimated to contain over 16.5 billion barrels of oil-in-place, with almost 10 billion barrels recoverable. Madagascar Oil, estimates that at full production the site could produce as much as 180,000 barrels per day over 30 years. From 2008 till 2010, Total carried out a programme of core drilling at Bemolanga. The studies revealed a mineable area of bitumen of approximately half of the total found on the Canadian tar sands. The Bemolanga bitumen is located on average just 15 metres below the surface, making it ideally suited for opencast mining.

However, financial concerns relating to valuation of the costs of extraction, production and export in relation to the price of oil, recently brought into question the viability of the project.  In June 2011, Total and Madagascar Oil received approval from the National Office for Mining and Strategic Industries (OMNIS) for a modification of the Bemolanga permit to focus on more conventional forms of extraction (heavy oil). An extension of one year was granted in June 2011, with an option for a further two-year extension to drill.

Most recently, it was reported that Total expects to start producing heavy oil at Bemolanga by 2019, while Madagascar Oil is aiming at production by 2015 on the Tsimiroro field.  Overall, under the terms of the production sharing contracts, Madagascar is set to receive just four percent of the oil revenue derived from the projects after a proposed thirty-year commercial exploitation.

Madagascar is considered the third most exposed African country to climatic catastrophes, including cyclones and droughts.  Over 67 percent of the Malagasy population lives below the poverty line and overall the country’s human development is ranked low.  The population of the Melaky region fits this profile, as they are disadvantaged by poverty, low literacy rates (40 percent), poor access to education and lack of access to information and modern communications.  As such, the population is extremely vulnerable and has little capacity or infrastructure to understand, negotiate or protect their rights. In particular, they are reliant on traditional forms of land tenure that offer little protection from compulsory government purchase systems and statutory compensation processes that are often poorly administered.

Given the vulnerability of the local communities in the target area and the context of a lack of transparency on the part of both corporate and state actors, there is a growing need in particular to establish clear baseline data in the areas affected by tar sands exploration and future production. This will assist in ongoing monitoring of developments.

Malagasy NGOs began monitoring the tar sands development in October 2010, carrying out outreach with communities in the Bemolanga area in order to assess their knowledge of the project and help them understand the potential impacts of tar sand development. Initial field research demonstrated that local people had very little understanding of the project and its implications for their communities, environment and the local economy.

In 2011, NGO representatives met with Total and Madagascar Oil, other civil society actors and with relevant ministries and authorities to try to gain further information about the tar sands development, including evidence of permits and social and environmental impact assessments. The authorities and oil companies were reluctant to provide evidence and relevant documentation on plans for the current and future development of the project.

In June 2011, a representative of Malagasy NGOs travelled to meet local advocacy groups in France and the UK and to urge shareholders in Royal Bank of Scotland (RBS) to withdraw financing from tar sands projects in Canada and beyond. At the EU level, the Malagasy representative and EU groups met MEPs and called on them to support stringent implementing standards for the Fuel Quality Directive (FQD) to ensure that imports of oil produced from tar sands are prevented from reaching European markets. In October, a fact-finding mission to Canada to see tar sands development first-hand also took place.

Malagasy NGOs have formed an Alliance to lobby the government provide research and information of future tar sands developments. Although Total may not be progressing with tar sands extraction, there are indications that other companies – in particular Chinese oil companies – are interested in Madagascan tar sands deposit. 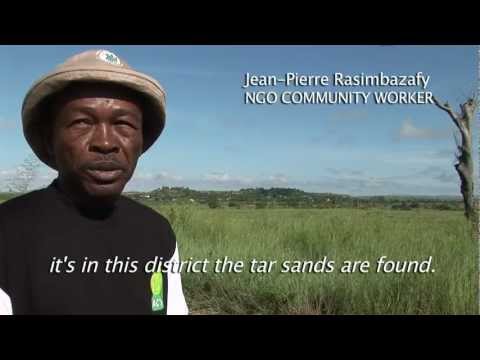 Dossier: Unconventional Oil - A Challenge for Local Communities
With conventional oil production in decline, the global oil industry is investing heavily in dirtier and riskier forms of oil and also in unconventional resources, such as tar sands, and oil shale. All are difficult and costly to produce, usually more carbon intensive than conventional oil and may have calamitous long-term impacts on the local environment. Documented by Christopher Walker  Dossier »