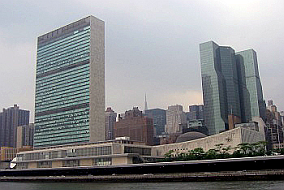 This article is also available in German.

There is little faith in the reform of the UN system; nonetheless, the United Nations Conference on Sustainable Development, to be held in Rio de Janeiro in 2012 – also known as Rio +20 – is not only to set the stage for a green economy, but also to provide an impetus for the institutional reform of the UN environmental sector. The ministerial-level advisory group brought together by the UN Environmental Program (UNEP) is preparing the reforms. The state of the discussion is analyzed here by Barbara Unmüßig.

The consensus in the family of nations is great: the international environmental architecture is in urgent need of reform, for it is incapable of handling global environmental crises. As UNEP Deputy Executive Director Angela Cropper (see note) writes, the current “International Environmental Governance” (IEG) system reveals “little rationality, methodology or connection between various parts. Rather, we find immensely complex disorder of more than 500 environmental agreements, disengaged institutions and bodies, and unsupported commitments.”

Business as usual not an option:

The institutional fragmentation of UN environmental activities and agreements, their haphazard coordination and inefficiency, and their underfunding are all familiar issues. The structures of environmental governance within the UN have always been a topic of controversial discussion; that has not made the UN any more effective. On the contrary, new agreements, programs, and funds have continually been added, which have in fact aggravated the coordination problem. In addition to the hundreds of environmental agreements, there are now “44 different UN institutions with mandates for environmentally related activities”, as Nils Simon of the German Institute for International and Security Affairs (SWP) in Berlin has ascertained (see note). This fragmentation, Cropper points out, has caused “multiple overlaps and gaps, as well as additional costs which are overstretching human resources, especially in developing countries.”

At the Johannesburg Summit in 2002 – the “Rio +10 Conference” – the call for fundamental structural reform was raised. Some European governments for the first time raised the issue of a world environmental organization, as a far-reaching response to the fragmentation of UN structures. NGOs reacted positively to the idea, since they hoped to create a counterweight to the World Trade Organization (WTO); nonetheless, it was politically impossible to implement. Neither the US under the Bush administration, which was during the unit decade implacably skeptical of new organizations, nor the majority of emerging and developing countries, warmed to the idea. The latter feared that environmental and development tasks would drift apart within the UN system.

Governments have for some time now been announcing that the status quo is no option. How did this change of mood come about? With the mandate from the UN General Assembly, various international consultation processes have been initiated since 2006. Even if they have not arrived at any concrete conclusion, they have laid the foundation for, and analysis of, errors in the system of environmental governance, and led to the realization that business as usual is no longer justifiable. The Obama administration too is now cautiously signaled a willingness to change. China too can imagine moderate improvements. But all that still leaves us a long way from a guarantee for true reform steps.

At the meeting of the Consultative Group in Helsinki in November 2010, there was no consensus. All options were to be examined further. In February 2011, the Governing Council of UNEP again addressed the reform proposals. Here, there were great differences between the EU and Switzerland on the one hand, which the favored the establishment of a new powerful UN environmental organization based on UNEP, and the USA, China, Russia, India and Argentina on the other. At issue is what the added value of such a centralized UN environmental organization was to be. Further-reaching proposals are viewed with great skepticism by many emerging and developing countries. They are blocking the attempt to push through a new umbrella organization.

The major exception is Brazil, which has been calling for a UN umbrella organization for the environment and sustainable development since 2007. As the host of the Rio +20 Conference, the Brazilian government wants to present a respectable performance. At the last preparatory meeting for the Conference at the beginning of March in New York, Brazil renewed its recommendations for a UN umbrella organization in an explicit statement. Under this concept, the mandates and roles of ECOSOC, UNEP and the CSD are to be newly conceived and newly defined, which is seen as necessary if the coherence, coordination and effectiveness of the present system of UN environmental governance is to be improved. The foundation of “UN Women”, in which the fractured UN women’s policy programs and organizations were brought together, is to serve as an example.

Pragmatism and a huge step forward – both of the same time?

The only thing that is clear right now is that the issue of reform of environmental governance will stay on the agenda for Rio +20. All the differences between the various actors have broken out anew. After all the failed attempts at reform of the past decade, the urge for a pragmatic solution is emerging ever more clearly. The reform will have to be realistic, and also politically acceptable for all the actors to be brought into the boat under the UN consensus principle. That sounds like the all-too-familiar lowest common denominator. It could however result in an upgrading of UNEP – although some developing countries are already asking critically what it all really means – more resources and a broader mandate?

The expansion of UNEP would not be wrong. The basic problem of poor coordination between the many environmental agreements on the one hand, and, on the other, the other organizations of the UN system and such additional international structures as the international financial institutions and the WTO, would still be present, however. Nonetheless, such a step would constitute proof that at least small reforms of the UN system are possible.

The Consultative Group will continue to work on the various options. As regards the reform options it has raised, it also refers to the High Level Panel on Global Sustainability that UN Secretary-General Ban Ki-moon has convened in preparation for the Rio +20 Conference. According to Ban Ki-moon, this panel is to “think big,” and present ambitious yet pragmatic plans for sustainable development in the twenty-first century. The report of the twenty-one member panel is to be presented in the fall of 2011. It is to be hoped that this panel will also address institutional reforms, in order to better mandate and equip the UN to solve global environmental crises, since the various blockades in the UNEP Governing Council are now emerging openly once again.

The central cause of the current weakness of international environmental policy and its structural incapacities are rooted in conflicts between various interests, and in problems of distribution and power within the very heterogeneous community of nations. A limited reform of environmental governance, too, will require political will on the part of policymakers. For this reason, many observers today – more than a year before the Rio +20 Conference – believe that a further-reaching reform of UN environmental governance will only come about if there is movement in the various top levels of governments. Where constellations of interests have solidified, as in the case of the UN climate negotiations, or with regard to climate and development funding, such small reforms in the area of environmental governance are not really very helpful. For the various interest groups, what is at issue is not a clearly defined control goal, such as a low carbon economy, and sustainable agricultural resource policy, or the “only” desirable governance structure. What is at issue is their own contradictory interests.

From 1996 to 2001, Barbara Unmüßig chaired the supervisory board of the Heinrich Böll Foundation, and was elected president of the foundation in May 2002. Her numerous contributions to periodicals and books have covered international trade and finance, international environmental issues, and gender policy.