Rangelands in dry areas frequently offer perfect conditions for renewable energy projects. However, project developers often do not take the consequences for pastoralist communities into account. A transparent and participatory process is needed that includes pastoralists and respects their right to free, prior and informed consent (FPIC).

MARSABIT – Pastoral communities live off the land. In northern Kenya, where I grew up, we raised local breeds of cattle, which grazed in the dry rangelands. But our land is more than the basis of our livelihoods; it also underpins our culture and identity. As the local maxim goes, “This is where our umbilical cords are buried.” If that cord is cut – if our communities are severed from the land – tradition tells us that we cannot survive.

Kenyan institutions, from school to government, take a different view. Schools teach that pastoralists live on barren and unproductive wasteland, and that our approach to livestock-rearing is archaic and environmentally destructive. Official policies aim to force pastoral communities to abandon their mobile livestock production system, in favor of more “advanced” or “modern” agricultural systems, such as cropping, which, according to conventional wisdom, is more productive and sustainable.

Pastoralism is a form of land use involving extensive grazing on naturally grown bush and grassland, the other use of which is unattractive or impractical due to climatic conditions, its sparse vegetation or its remoteness. On such land, pastoralists keep livestock or semi-domesticated animals, often in a mobile form, as their main source of livelihood. Depending on the definition, estimates of the number of pastoralists worldwide vary between 100 and 500 million.

It was not until I was engaged in postgraduate studies that I encountered credible evidence to the contrary. It turned out that my community in northern Kenya had been right all along: pastoralists’ livestock-husbandry practices are well adapted to dryland conditions, and pastoralism is a viable land-use option that can make sustainable use of dispersed resources.

Unfortunately, I also learned that the prejudice against pastoral systems is pervasive. And the deeply flawed logic underlying this prejudice continues to influence land-use decisions, including the decision to allow rangelands to be appropriated for green-energy projects.

Rangelands are not wastelands

It is easy to see why green-energy producers have set their sights on rangelands, which they misleadingly label “wastelands.” Because rangelands are fairly flat and tend to experience high solar irradiation and strong winds, they are ideal sites for cheap – and lucrative – solar and wind power projects.

It helps that rangelands are sparsely populated. Although local residents often resist the development of solar and wind farms, pastoral communities have less capacity to challenge the authorities than wealthier and more numerous urban dwellers do.

Pastoralists’ power to defend their interests is diminished further by their frequent exclusion from relevant decision-making processes. In Kenya, India, Morocco, and Norway, large-scale green-energy projects have been implemented on lands used by pastoralists, without adequate consultation with these groups and with limited regard for the principle of free, prior, and informed consent (FPIC) established in global human-rights agreements.

According to the FPIC principles, indigenous and pastoral communities have the right to give or withhold permission for a project that may affect them or their territories. But traditional pastoralists usually lack legally recognized titles to their common grazing land, which is supposedly held by the state “in trust” for its citizens.

But states often choose not to honor traditional land rights, even if it means violating international agreements. So, where solar farms are built, pastoralists lose access to pasture. Wind farms interfere less with grazing, but are often viewed by pastoral communities as violations of their land and cultural rights. In fact, as my colleague Ann Waters-Bayer and I show in a recent study, green-energy projects have led to land and energy dispossession, interference in livestock migration routes, disruption of pastoral cultures, and decreased resilience of the pastoral land-use system. 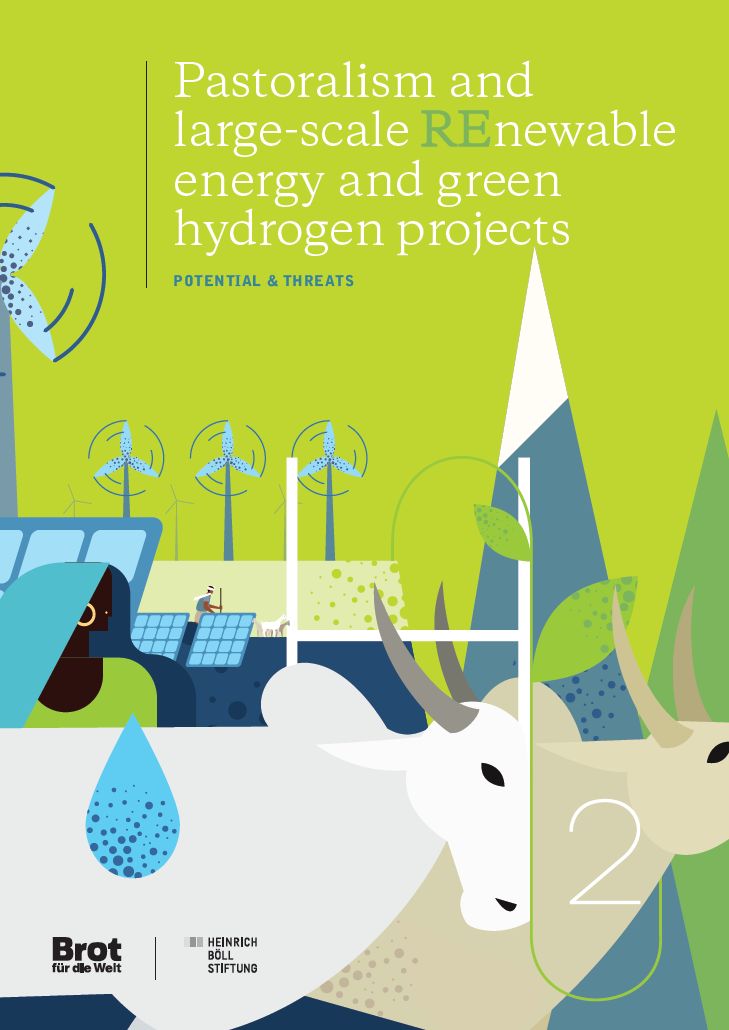 This joint report by the Heinrich Böll Foundation and Bread for the World examines evidence from existing large-scale projects and derives recommendations.

Pastoral communities have tried to resist – sometimes violently, sometimes through the courts. In two cases – one in Kenya, and the other in Norway – courts ruled that the land-acquisition process had been illegal. But, in both cases, the wind turbines are still spinning, highlighting the uphill battle pastoralists must fight to protect their lands, cultures, and livelihoods.

There are better models for managing the lands on which pastoralists rely. In Mongolia, effective consultations with local communities mean that local concerns about the siting of solar farms have been taken into account during project design, and herders retained full access to the pasture under wind turbines and power lines. Pastoral systems were thus not disrupted at all. In Canada, Kenya, and Mexico, there are green-energy projects that benefit local communities through revenue-sharing.

Such models cannot be adopted too soon, because the world is facing a likely boom in “green-grabbing” for energy expansion. The war in Ukraine has contributed to a spike in global energy prices and sent several European countries scrambling for alternatives to Russian oil and gas. Together with pressure to make progress toward achieving net-zero emissions, the incentive to expand green-energy production is stronger than ever. The “wastelands” of the sunny, windswept dry tropics and subtropics have never been so commercially enticing.

Participatory planning of integrated land use

Obviously, expansion of green energy is vital. Green-energy projects can even improve animal welfare, such as by providing shade. The issue comes down to design: developers should embrace multifunctional land-use approaches that integrate crop farming, livestock, biodiversity protection, rural social and economic activities, and energy production.

The only way to achieve this is through a transparent, inclusive, and participatory process in which pastoral communities play a central role. Stronger enforcement of human-rights principles like FPIC and more robust legal systems for recognizing rights to common land must also be essential components of green-energy projects.

Failing that, a growing number of pastoralists will lose their land to Big Renewables, resulting in increased poverty, migration, hopelessness, and conflict. This would be the height of climate injustice.

Large-scale renewable energy projects are being developed in the drylands of Africa, Asia and Latina America without adequate consultation with pastoralists that have been using the land for grazing their livestock since time memorial. This joint report by the Heinrich Böll Foundation and Bread for the World examines evidence from existing large-scale projects and derives recommendations.

Dossier
Within the energy transition, international trade in green hydrogen and its derivatives will play an important role. But what opportunities and risks does this entail for exporting countries in the global South? What framework is needed to ensure that investments and trade develop from the start with sustainability in mind? The Heinrich Böll Foundation and Bread for the World are exploring these questions in a joint project.

10 Things You Need To Know About Hydrogen

Listicle
The EU and Germany aim to be climate neutral by 2050 and 2045, respectively. The commitment to climate neutrality means that zero-emission alternatives will replace emissions-intensive processes and products. One energy alternative is climate-friendly hydrogen. However, hydrogen is not an all-purpose miracle that solves everything at once.
By Dr. Stefanie Groll