War in Ukraine: The effects are dramatic

How the war in Ukraine threatens global food security – an interview with Dr Martin Frick, head of the Berlin office of the UN World Food Programme (WFP).

Russia and Ukraine are significant food producers. About a third of global wheat exports comes from these two countries. They are important trade partners for countries like Egypt, Indonesia, Nigeria, and Sudan, where millions of people already face food insecurity. Food prices have risen almost continuously worldwide since June 2020. Further price increases caused by a continuation in the Russian war of aggression against Ukraine could lead to severe food instability and hunger - not just in Ukraine, but worldwide. 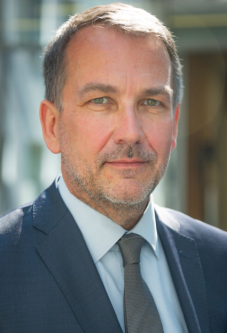 Putin's war of aggression against Ukraine came as a great surprise to many people. How is the WFP reacting?

The WFP is institutionally prepared for shocks like this - that is our job. One hundred and fifty of our staff are currently on their way to the borders of Ukraine. Within just a few days of the start of the war, we had already started to distribute the first 10,000 loaves in Kharkiv, and we are now building infrastructure in three Ukrainian cities. As we are getting so much help and support at the borders, the WFP is focusing on building up a strong supply chain to bring food into Ukraine. This means we can support the population if the situation comes to a head again – and it looks like that is exactly what will happen.

Russia and Ukraine are significant food producers – 29% of global wheat exports come from these two countries. What effect will this war have on global food security?

The effects are dramatic. There is already a global hunger belt, and the coronavirus pandemic has also pushed 141 million people into acute hunger. We now see that wheat prices are exploding – prices have risen by nearly a third since the start of the war. This trend had already begun prior to that. The wheat price on the world market was already up a third on the previous year. This means that the countries already facing the greatest difficulties with their food supply could slide further towards hunger.

Which countries, regions, and population groups are most affected?

The Middle East is very severely affected. Lebanon gets more than 50% of its wheat imports from Ukraine. In Tunisia this figure is 40%, and in war-torn Yemen it is 22%. We can see the consequences, for example, in the already destabilised Horn of Africa, and also in areas like the Sahel. We live in a globalised world, so a shock like this is felt around the world. Within societies, as always, it is the poorest of the poor who feel the effects most keenly, because they already have to spend the largest proportion of their income on food.

World food prices have been rising almost continuously since June 2020, and the FAO Food Price Index is at its highest point since 2011. What are the causes for this?

Conflicts are still the main cause. But even before the war in Ukraine, we summarised the key triggers for rising food prices as the “three Cs": “Conflict”, “Climate Change” and “COVID-19”. The progress report of Working Group II of the Intergovernmental Panel on Climate Change (IPCC) was published on 28th February. It paints a dramatic picture regarding food security, poverty, and vulnerability. The causes of the possible famine in Afghanistan include three consecutive periods of drought, for example. These, in turn, came about because climate change means that not enough ice and snow remain in the mountains, so in spring there is a shortage of water for farming. In Central America too, we are seeing prolonged droughts, which are further worsening the food situation.

It is not just an issue regarding wheat prices; prices for oil seeds are also higher than ever. Here we are also seeing developments driven by climate change. As well as the “three Cs” that I mentioned, there is a fourth C – “Costs”. Costs are getting out of control – not just for food but also for fuel. Farming, which is often energy-intensive, depends on diesel, and also the prices of artificial fertilisers are going through the roof. For us, as an organisation that is also involved in large-scale logistics, fuel prices are a very important factor. Unfortunately, this means that we cannot reach as many people with the money that is available to us.

Does this mean that the rising prices are also affecting the supply chains of the World Food Programme?

Absolutely. Up until now we got 50% of our wheat from Ukraine, as well as foods such as oils and other products. In terms of tonnage, until now Ukraine was our largest food supplier. We always try to strengthen local markets through our purchases, but in many situations we have to buy on the world market, and then a war like the current one in Ukraine affects us directly, of course. We can compensate for it, and use other sources at higher prices. Of course, many people in poverty, who are only just getting by, cannot do this.

The sowing period is now beginning in Ukraine. Are you in contact with your suppliers in Ukraine?

Yes, we are in very close contact. Distribution of food is principally carried out through Ukrainian organisations. They are still in a position to actually provide food to families. In Ukraine, for example, we had bought a large consignment of sunflower oil and yellow peas, which is still in the country – we will now use this consignment as food aid for the Ukrainian population. We are also in the process of sending 500 tonnes of wheat flour to Kyiv. Of course, it is absurd to have to bring wheat flour into a country that is actually a huge wheat exporter. This also shows how destructive and brutal this war is.

Increases in food prices due to wars contribute to further conflicts – even in places that were not themselves involved in the original war. Are you expecting more unrest, conflict, and hunger crises?

This will mainly depend on how quickly peace can be achieved in Ukraine. For example, in 2010 there was a great peatland fire near Moscow. Because of this, the Russian president at the time, Dmitry Medvedev, imposed a ban on wheat exports. This did not cause the Arab Spring, but it was certainly one of the triggers for it. Since ancient times, the bread price has been highly political, and when people are pushed beyond the boundary of poverty and hunger, of course this brings instability.

Which systemic approaches does the WFP follow to strengthen vulnerable groups, to react to crises, and to ensure access to food?

If you were in my office now, you would see a large photo of one of our projects in Burkina Faso. Women are using very simple tools to dig crescents in the dry earth. These stop rain from flowing away so quickly when it falls, so the water sinks into the ground better. In the centre of these crescents, the women dig triangular hollows, which are filled with straw and dung. This works like a sponge. In the middle of this hollow, a tree seedling is planted. This amazingly simple technology allows trees to grow and survive. When the trees are large enough, their shade makes the surrounding area cooler and more moist, so farming is possible again. Agroforestry systems like this are outstandingly effective at making lost land cultivable again – and this is exactly what our approach must be.

As I mentioned, the figures from the IPCC progress report are dramatic. We urgently need integrated solutions to restore food security, to strengthen the role of women, to protect the groundwater, and to achieve climate adaptation and resilience.

What role do local markets play in food security?

Local markets play a very important role, as 80% of food around the world is still produced by small-scale farmers. If we take climate justice seriously, the first thing we should do is support small-scale farmers. The COVID crisis and the shock waves of the Ukraine conflict show that we need resilient, localised food systems.

What do you think is most urgent at the moment?

The most important thing of all is peace. The global solidarity that we are seeing at the moment also has political effects, of course. My background is in diplomacy, and I have never seen anything like the recent “Uniting for Peace” resolution at the United Nations General Assembly. States cannot ignore this.

Yesterday evening I was back at the main station in Berlin. I have been deeply moved by people's willingness to help. Unfortunately this willingness to help is needed not just in Ukraine but globally. We cannot forget all the other people who are reliant on assistance.

Analysis
The Russian aggression against Ukraine weakens Russia's hegemony in the post-Soviet space. Countries such as Turkey and China are becoming important players in the reorganization of the regional order. The EU must improve its policy towards the eastern neighborhood in order to remain a relevant stakeholder.
By Dr. Stefan Meister

Journalism in Ukraine: When the war is not only informational

Report
The once lively scene of local and national Ukrainian media is threatened by the brutal Russian invasion and occupation. War has changed the work of journalists and media business models are under threat.
By Inna Nelles