Berlin/Leipzig. Konzeptwerk Neue Ökonomie and Heinrich Böll Foundation are launching today a the "Societal Transformation Scenario" (STS), a low-risk and socially just climate mitigation scenario for limiting global warming to 1.5°C. The scenario models for the first time a global 1.5°C mitigation pathway by embarking on a socio-ecological transformation and without deployment of high-risk technologies such as CCS, geoengineering or new investments in nuclear power.

The authors calculate concrete annual emission reduction targets for various sectors such as transport, food and housing and outline proposals for a socio-ecological transformation compatible with these reduction targets. That way, global emissions are being reduced by 50 percent from 2020 to 2030 and by a further 22 percent by 2050.

Co-author Linda Schneider of the Heinrich Böll Foundation comments on the publication of the study: "Little to nothing has happened since the Paris Agreement: Global emissions continue to be on the rise. Some of the assumptions in the models of the IPCC reports, such as an adherence to economic growth in the global North up to the year 2100 and beyond, lead to a dead end: in these models, global warming can often only be limited to 1.5°C by resorting to high-risk technologies, some of which have hardly been tested. Current debates are lacking potential trajectories that explore deeper transformations of our economies and societies, such as limiting production and consumption in the Global North. In view of the different development needs worldwide, this is neither target-oriented nor does it take into account the historical responsibility of early-industrialised countries for the climate crisis. Fairness and socio-ecological compatibility need to be a core component in the global transformation that cannot be postponed, and must also be spelled out globally and negotiated transparently. The STS is an invitation to do so. We only have a few years left to embark on 1.5°C pathways," said Schneider.

The results of the STS show, for example, a transformation in the transport sector in industrialised countries that leads to 3% less final energy consumption per year, while – by way of comparison –  the COVID19 lockdowns led to a temporary decline of the transport sector of up to 50%. In the building sector, two-thirds of energy consumption can be saved by 2050 through better technology, fewer appliances and less living space per person (on statistical average). In addition, changes in diet, such as a 60 percent drop in meat consumption in industrialised countries, free up large

agricultural areas that can be restored to natural ecosystems or managed in a more sustainable manner. Cascade effects prompted by the former sectors in the model lead to a strong decline in industry energy demand in the Global North of up to 50 percent.

The greenhouse gas reductions of the STS were modelled with the Global Calculator. The Global Calculator allows for a calculation of the impact of different production and consumption levels on global greenhouse gas emissions. In order to reflect and visualise the historical responsibility of the Global North, the authors have adapted the model to split global consumption into two countries groups representing the early-industrialised Global North and the Global South, which has far less contributed to the climate crisis.

Co-author Kai Kuhnhenn, Konzeptwerk Neue Ökonomie, said: "If we want to achieve the drastic emissions reductions in a sustainable way and without resort to risk technologies, the only way to so is to reduce conventional production and consumption patterns in the Global North. Reductions in production and consumption have to be part of a broader and deeper socio-ecological transformation of our economies and societies. What such a transformation can look like exactly and for individual countries and regions should be the subject of a democratic and transparent debate. Integrated Assessment Models, which are usually used to create global reduction scenarios, inhibit such open and transparent discussions by hiding political and ethical assumptions in their algorithms. This is why we chose the Global Calculator (GC), a relatively simple, transparent modeling tool," Kuhnhenn says.

The study was authored by Kai Kuhnhenn, Linda Schneider, Luis Filipe Carvalho da Costa, Eva Mahnke and Steffen Lange. With the study, the authors want to open up debates about possible pathways and trajectories to 1.5°C, and stimulate critical discussion in climate science about the role of economic growth and current production and consumption levels in the Global North. 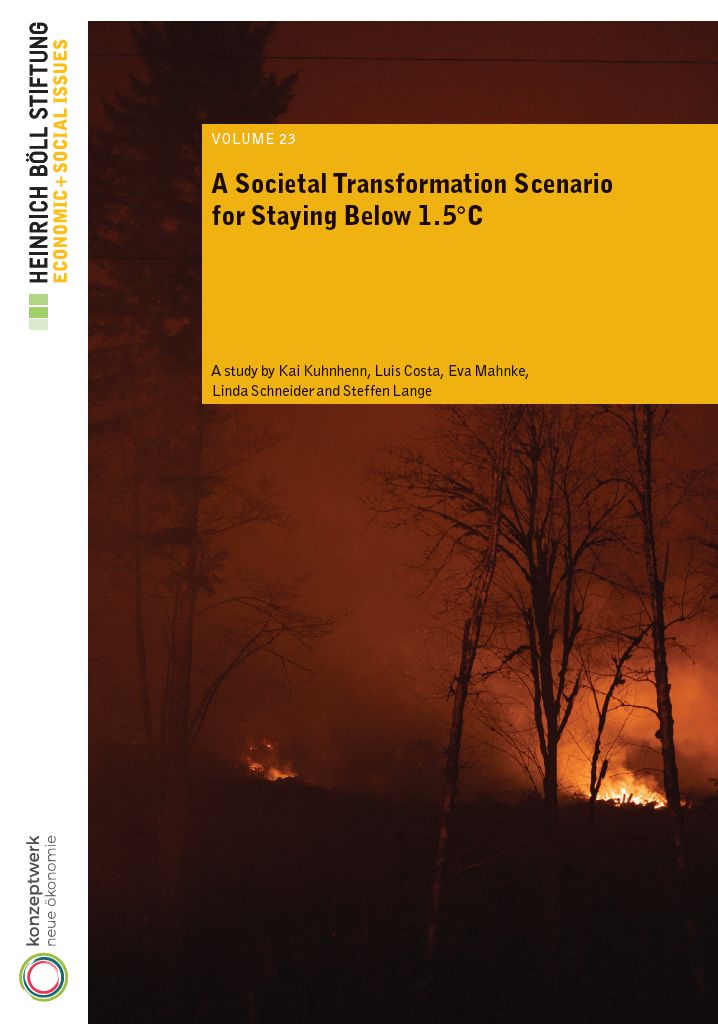 On December 15, the authors invite interested journalists to the expert discussion "No Limits to Growth? A Societal Transformation Scenario to limit global warming to 1.5°C".

You are kindly requested to register here: https://calendar.boell.de/de/event/keine-grenzen-des-wachstums.

The authors can be contacted via the press office.