Since the 2017 federal elections, Alliance 90/The Greens (Bündnis 90/Die Grünen) have increased the number of their governmental participations in the Länder on a high level. In Hesse, Bremen, Thuringia and Hamburg they were able to continue four coalitions in identical or slightly adjusted constellations.

By joining the government in Saxony (CDU/Greens/SPD) and Brandenburg (SPD/CDU/Greens), the Greens have added yet two more coalitions. By 2020, they are now once again in power in 11 out of Germany’s 16 Länder (five of which are in the eastern part of the country) and lead the green-black coalition in Baden-Württemberg as the strongest force.

A look at the formation of governments in recent years underscores a long-standing trend. When the German Greens govern, they focus first and foremost on their core brand, i.e. the ecology within the triangle of environment, climate and energy. This is most visible in their choice of ministries.

Wherever the Greens govern, they are responsible for the Ministry of the Environment, which in most cases includes the policy fields of environment and climate. They have by far the most governmental responsibility in this policy area – both in comparison with other parties as well as when compared to other policy areas within the Green party. This focus on ecology is underpinned by additional ministerial responsibilities for environmentally relevant fields such as energy, agriculture and transport. This pooling of resources underscores the fact that ecology is the central field of action in the Greens' government work in the Länder.

An evaluation of political science studies covering the years from 2005 to 2018 shows that in their core competence, the Greens are governing successfully. Coalitions in which Alliance 90/The Greens are involved pursue a more ambitious policy of ecological modernization than do those without Green participation. This is particularly evident where Länderhave a comparatively large scope for action: in climate and energy policy (in particular, renewable energy) as well as in agricultural policy (in particular, animal welfare).

At the same time, however, the evaluation of Green government work also shows that the party's new success opens up the opportunity to shape other policy areas in government as well. The Greens make use of this opportunity in a variety of ways. For example, in addition to the core issue of ecology, a diversification is discernible that goes hand in hand with government involvement. For example, the Greens are now responsible for a number of ministries in other policy areas such as consumer protection and integration/migration (6 each), justice and social affairs (4 each), finances and science/research (3 each), health care and economics (2 each) and European affairs (1). The responsibility for these ministries goes hand in hand with the development of personnel capacities and technical expertise. The breadth of topics enables synergy effects between the Länder and the federal Greens in the form of an informal division of labor via the so-called “G-coordination” for federal political processes.

Bundesrat: Strong veto position of the Greens on consent legislation

Through the Bundesrat, Alliance 90/The Greens influence federal legislation. They are involved in coalitions that control 45 of the 69 seats in the state chamber. The states without Green government participation command a total of 24 votes in the Bundesrat. For a 35-vote majority, therefore, the federal coalition of CDU/CSU and SPD must have at least three states with Green participation on its side with 11 votes.

In Germany’s form of federalism, some bills require consent of the Länder (Zustimmungsgesetz). Other bills, depending on the specific policy area, are considered subject to objections (Einspruchsgesetz). The Bundesrat has less influence on objection bills than it does on consent bills. If a consent bill fails to achieve a majority, it is thereby stopped in the Bundesrat. In the case of consent legislation, the Greens are therefore in a strong veto position, which they can use to either stop bills or to play a decisive role in shaping them, as the case of the 2019 "climate package" has shown. Here, the Greens have pressured successfully for a higher CO2 price.

Unlike laws that require consent, so-called objection bills can merely be delayed by the Bundesrat. If the Bundesrat does not call upon the Mediation Committee, it automatically approves the bill. In order for the Greens to object, they would therefore have to convince their respective coalition partners to agree to call up the Mediation Committee, a difficult undertaking that is rarely considered.

The hinge party of the German political landscape

A look at the Länder reveals that Bündnis 90/Die Grünen currently rule in eleven different coalitions. No single constellation is like the other. Of the eleven coalitions, six are assigned to the so-called A-side (SPD-led governments) and five to the B-side (CDU/CSU-led governments). The Greens most frequently govern in coalitions with the SPD (8) or the CDU (6), occasionally with the Left Party (3) or the FDP (2) as additional partners. In only three Länder do the Greens govern in a coalition of two, while in eight countries they govern in coalitions of three.

This heterogeneity in the coalition landscape demands a high degree of flexibility from all parties involved, as well as the ability to compromise across party lines. At best, coalitions succeed in ensuring that all partners leave their mark within the work of government and communicate their own ideas and concepts convincingly to their respective supporters. Failure to do so would blur the differences between the parties, and flexibility would leave a pale taste of arbitrariness. Every coalition faces the challenge of implementing a joint policy of the coalition on the one hand, and of allowing the respective coalition partners to distinguish themselves, on the other hand.

For the parties, it is demanding to govern in Länder with such different constellations and yet still present a coherent overall picture. For instance, the Greens of Baden-Württemberg – the cradle of the German car industry – pursue a different economic policy in the coalition with the conservatives than the Greens in the state of Thuringia, where the Greens are part of a center-left coalition led by the Left Party. Looking at the national polls over the last few months, however, this coalition diversity doesn’t seem to be hurting the Greens. Most recently, 72 percent of all eligible voters in Hamburg answered YES to the question of whether they would like the Greens to govern after the elections. Such a high level of support even beyond the Greens’ core electorate can be interpreted as an indication that the party is currently succeeding in presenting a coherent picture of itself. In recent years, the Greens have consolidated their role as a hinge party in the German political landscape.

Preparations for joining a coalition on the federal level in 2021

It is not far until the federal elections in autumn 2021. The COVID-19 pandemic has brought high poll ratings for the governing parties, especially for the CDU/CSU. The Greens, which in September 2020 are polling between 18 to 20 percent, are preparing to join a coalition on the federal level. The last time they governed federally was in the “red-green” coalition with the SPD from 1998 to 2005. Unlike then, however, this time they would enter coalition negotiations with a wealth of governmental experience. With the numerous participations in government in the Länder of the last 15 years, they have gained extensive experience in the craft of governing: How is a ministry optimally tailored to achieve its policy goals? What kinds of elements should coalition management include? Which ministry can perform the function of a junior government headquarter for the Greens – presumably, the small coalition partner? Which leading positions in subordinate agencies should be filled, or should the coalition partners decide by mutual agreement?

It is to be expected that joining a coalition at the federal level will again change the party's internal structures. For this would mean the addition of an important actor: the government Greens at the federal level. So far, the federal and Länder Greens have been coordinating in the G-coordination, which is organized by the Länder Greens and is mainly shaped by the agenda of the Bundesrat. This coordination currently plays the role of a strategic center for the party. The official 16-member Federal Party Council, on the other hand, serves primarily for internal party work between the party's committees, the parliamentary groups, and the Länder associations. With a participation in the federal government, the federal side – in addition to the federal party and the parliamentary factions, especially the Green federal ministers – would play a stronger role than before in the party's internal processes. For practical reasons alone, then, it is unlikely that the G-coordination will continue to maintain its function as a strategic center. If the Greens do enter the federal government, therefore, they will either have to upgrade the Federal Party Council or create a new body in which the party's leaders at federal and state level can coordinate their efforts.

The text was first published by the Heinrich-Böll-Stiftung in German here. It is part of the multi-year project Green Governance Practice and builds on the earlier studies German Greens in Coalition Government and Governing Ecologically.

A federal climate force: How the German Greens shaped the climate package through the Länder

Analysis
Questions of environmental and climate policy remain relevant even during a pandemic, as the protests and debates about the stimulus package to fight the crisis show.  The German states have taken on a deciding roll regarding questions of implementation – which started already during the negotiations for the climate package. The Greens contributed the most to the climate package's increased substance.
By Arne Jungjohann 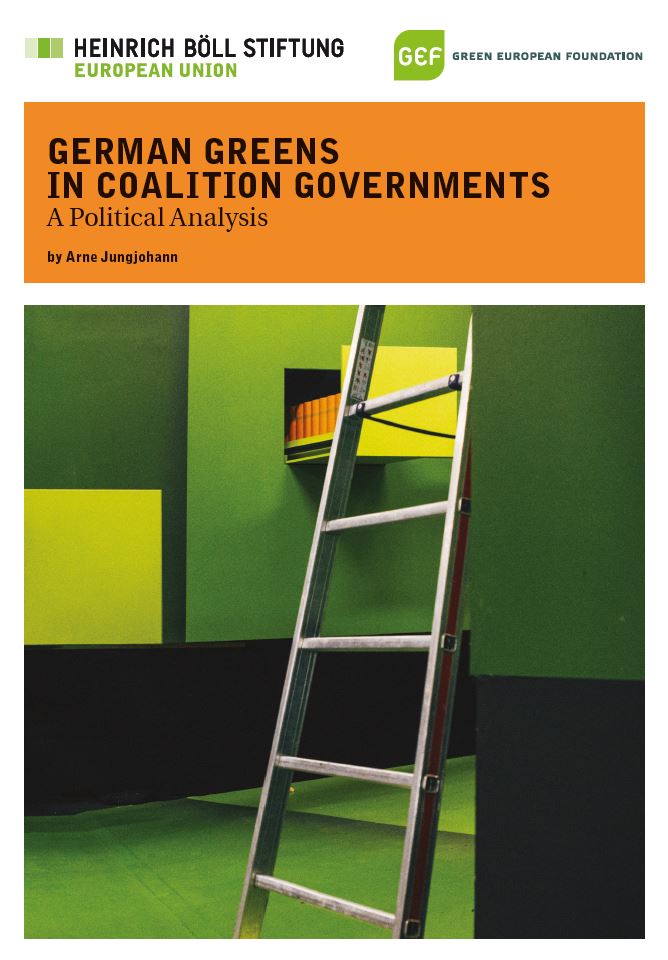 The Alliance 90/The Greens Party has succeeded in taking over governmental responsibility in the majority of the 16 federal states. In this study the political scientist, Arne Jungjohann, has analysed Green government participation of previous years. 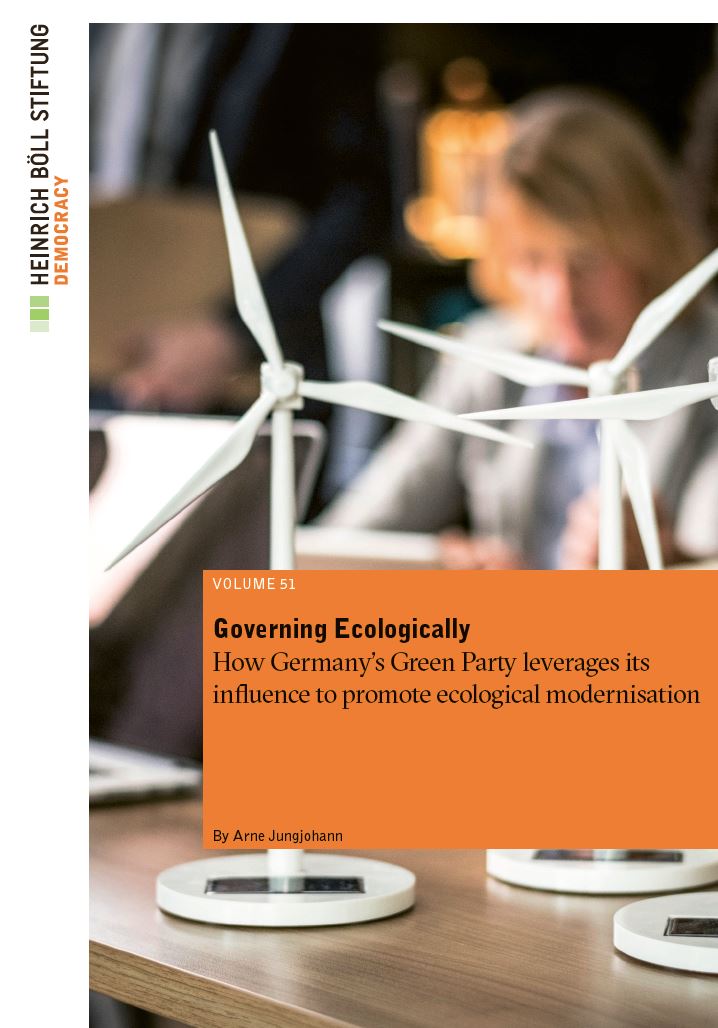 In voter surveys, the German Greens regularly come out as the party deemed to have by far the greatest competency in this area and in energy policy as well. This study by Arne Jungjohann tries to answer if this image is justified, as it looks at the subnational level of the federal states.