Cambodia has made notable progress in constitutionalizing gender equality. However, there is still no solution for persisting gender stereotypes, discrimination of women and marginalized groups and domestic violence.

Cambodia ratified the United Nations Convention on the Elimination of all forms of Discrimination against Women (CEDAW) in 1992 and ratified its Optional Protocol in 2010. Furthermore, by integrating the principle of equal rights for women in the Constitution in 1993 and creating a Ministry of Women’s Affairs, the Royal Government of Cambodia (RGC) embraced its commitment to the theory of formal gender equality.  However, there are still fundamental challenges to achieving substantive equality between men and women.

The one consistent pattern across all sectors and segments of society is the endurance of negative gender stereotypes.  Persistent beliefs that women are less capable than men and expected to conform to traditional roles in the family serve as an obstacle to progress in the implementation of every article of CEDAW.

These attitudes are held by men and women, private and public employers, educators, health professionals, law enforcement officers, and NGO workers.  Another pattern is the RGC's understanding of equality as a general goal of formal equality, rather than an obligation to achieve substantial equality in all sectors as soon as possible through temporary special measures, including quotas.

Required NGO influence is a question of money

However, there is concern that the budget and resources for implementing these plans rely far too heavily on donations from NGOs and international aid.

While the Cambodian economy is strong and has continued to grow at 7% per year according to the Ministry of Economy and Finance, foreign aid has been decreasing. The NGO Forum platforms estimated in 2017 that an additional $700,000 is needed from NGOs to develop programs aimed at achieving the SDGs. RGC will need to increase its own role significantly if progress is to be achieved in an environment where NGOs' influence is ever shrinking. Even though the newest action plans contain budget elements, the plans are still designed based on the interests of short-term donors funding those plans.

For example, in 2019, UN agencies and the Australian government funded the gender assessment and action plan against violence against women, so the priorities of the plans and the assessment mirrored the donors’ goals.  It is a positive step that the Ministry of Economy and Finance was invited to participate in consultations, and that trainings were suggested to aid local officials in making budget requests for funding for the Commune Committees on Women and Children. 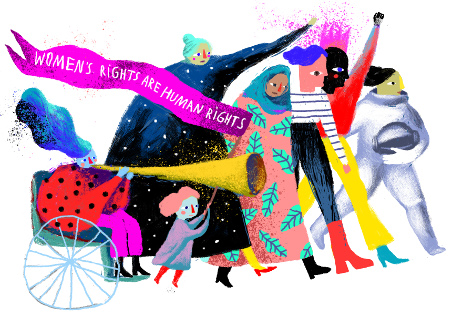 This text is part of our dossier 40 Years CEDAW - The International Bill of Rights for Women.

In December 1979, the Convention on the Elimination of All Forms of Discrimination against Women (CEDAW) was adopted in by the United Nations General Assembly. Our authors sum up the contributions CEDAW has made to the position, rights and everyday life of women is several countries.

There is a lack of strategies to reduce existing stigmata

However, the fundamental problem is that there is no longer-term strategy for the government to use the national budget to achieve the aim of eliminating gender discrimination. Commitments are limited to partial implementation in some districts that already receive funding from foreign sources.

Additionally, while CEDAW requires promotion of rights of all women and girls,

RGC consistently shies away from making official policies and laws that protect marginalized groups including sex workers and LGBT+ individuals, who are often the subject not only of stigma and crime from the general population but are harassed, assaulted and subject to arbitrary arrest by law enforcement officers.

There is a Sexual Orientation and Gender Identity and Expression (SOGIE) curriculum ready for use in public schools, but educators are reluctant to implement it. Public service videos are available on SOGIE, but television stations (which are all under government control) refuse to air them. The Ministry of the Interior has a training program on gender sensitivity, but it is not known how well it applies international standards, such as UNSC 1325 on avoiding violence against women in conflict situations, including civil strife.

Approaches to problem solving often worsen the situation even further

The government occasionally enacts policies to promote women to address situations that have received media attention, but they are short-lived or attempt to solve problems by reducing women’s choices. For example, when the population of pregnant women and women with small children in prisons gets too high, there is a release of mothers from jails.

Yet, the population rises again because the conditions leading to the problem are not addressed.  When there were scandals with foreign spouses neglecting Cambodian wives, the response was to ban all Cambodian women from marrying foreigners without a substantial income. When concerns about the lack of women in leadership was addressed, one woman was assigned to the position of deputy governor in each province.

Yet, never has the CEDAW Article 4 provision of temporary special measures been enacted in a systemic way to address fundamental stereotypes and double-standards that consider men but not women to be qualified for political and business promotions.

No quotas have been introduced, nor have the recommendations of using a zipper-system (alternating men and women’s names on candidate lists) been adopted.

Local authorities are concealing reports of violations of women's rights

The RGC is often reluctant to acknowledge the extent of some problems, such as the role of family members in trafficking cases or the extent of intimate partner violence. Government officials often note that domestic violence (DV) and rape do not happen in some areas because the complaints made to local authorities are not recorded.

Cases are reconciled at the local level even if the result is that rapes are not prosecuted and women are encouraged to stay in abusive situations. The law does not explicitly make nonconsensual sex a crime or a type of DV, and many people do not believe that a woman has the right to refuse sex to a partner or spouse.

CSOs working with indigenous women have noted that even murder cases against women are sometimes not investigated and prosecuted without significant outside intervention (via NGOs or legal aid) on behalf of the victim.  There is one known complaint about the issue of rape under the CEDAW Optional Protocol, and the CSO which brought it to the Committee’s attention has been subject to additional government scrutiny in retaliation. The process can continue to be used, but NGO-CEDAW is recommending that any future complaint be done as anonymously as possible.

Currently, the CEDAW review process is a good way to address women’s rights issues because every time CSOs bring the above concerns to the Committee’s attention, the RGC feels obligated to seriously consider the Committee’s questions and concluding observations.  Moreover, civil society has been able to obtain some statistics not otherwise available because of this process. The insistence of the Committee to provide additional and updated data is having the positive effect of forcing the RGC to address systemic flaws in its own data collection system.

Approaches to tackling these problems in the future

The goal of advocacy in 2019 at the CEDAW review of Cambodia is to get clearer, focused recommendations from the Committee to address some key issues not addressed in previous sessions. For example, the Committee has asked RGC for more information about key concerns such as:

NGO-CEDAW’s alternative response to these questions will point out that RGC needs a comprehensive anti-discrimination law that clearly defines discrimination based on sex, gender identity, disability, ethnicity, race, and religion and provides remedies. CSOs can point out that strict enforcement of existing law actually permits some child marriage and encourages mediation of every domestic violence case. As a result, the Committee can give a clear suggestion to the RGC to establish and amend the laws as needed to address discrimination, and the RGC will feel obligated to work toward following those suggestions.

Civil society organizations anticipate some strong suggestions for the RGC from the CEDAW Committee and are planning awareness raising and advocacy around those concluding observations.

CEDAW and the USA: When Belief in Exceptionalism Becomes Exemptionalism

Analysis
The United States it the only established democracy in the world failing to ratify CEDAW. While common justification lies in the realm of patriarchy and religion another lies in the notion of American exceptionalism – in fact its exemptionalism.
By Liane Schalatek

40 Years CEDAW: The International Bill of Rights for Women

Special
On December 18th 1979 the Convention on the Elimination of All Forms of Discrimination against Women (CEDAW) was adopted by the United Nations General Assembly. We sum up the contributions CEDAW has made to the position, rights and everyday life of women.