Stefanie Groll takes a look at the long awaited report, which is considered the onset of the coal exit in Germany. What does the report propose for climate protection, structural change, workers, and industries?

In fact, everyone knows that Germany would have to phase out coal completely by 2030 in order to fulfill its commitments to the Paris Climate Agreement. The measures proposed in the coal commission´s report would result in more greenhouse gases being emitted in the electricity sector than allowed under the Paris climate agreement. The energy sector is failing. That is bad and it puts pressure on CO2-intensive sectors such as transportation and buildings. Unfortunately, these sectors seem even harder and more complicated to decarbonize. Germany will not reach its 2020 climate target, this is now postponed to mid 2020.

The prime ministers of the coal states have demanded billions of euros for the structural change and will probably get them. The Coal Commission proposes a law to secure €1.3 billion annually over 20 years, distributed to all four coal mining regions. In addition, €0.7 billion per year are to be made available by the federal government independently of the budget. Together, this amounts to the €40 billion over 20 years that are currently being cited again and again in the media. It is not yet clear which region will get how much. An allocation formula still has to be found. A colorful bouquet of proposals for structural development in the coal mining regions – around 180 pages – was appended to the report. The projects can be broadly categorized in five main areas of action:

The Commission’s recommendations include a “coal-region bonus” for transport infrastructure projects to speed up their implementation in the four mining regions. In general, the Commission is advocating various fast-track procedures and processes to access, deploy and ensure the effectiveness of financial resources. The Commission recommends in several places in the report that the funds be used for sustainable infrastructure, industries and economic sectors. The extent to which this will succeed – especially as coal-related and energy-intensive industries remain and are to be researched – is a critical question. At first glance, not all proposed projects are low-carbon or “green”.

Phasing out coal will cost a thing. Looks like the phase out will be a golden hand shake for coal companies. Operators will be given generous compensation should their plants be mothballed or closed ahead of time. Manufactures may also get a compensation if electricity prices rise as a result of lower supply from comparably inexpensive coal-fired plants.  The current relief scheme for these indirect costs will expire in 2020. The government wants to apply to the EU (under state aid rules) for an extension of this compensation. The “electricity price compensation” for energy-intensive companies should continue until 2030. The commission also proposes mechanism to keep down electricity prices for private consumers.

First and foremost, the decision to set up the Commission for Growth, Structural Change and Employment mandates the creation of a concrete perspective for new, future-oriented jobs in the affected regions.

As security for older employees in lignite mining (aged 58 and over), the Commission recommends an adjustment allowance (Anpassungsgeld, APG) from federal funds to compensate for shortfalls prior to their pensions. There would be a similar provision for employees in hard coal-fired power plants.

In addition to the adjustment allowance, the social security of employees will necessitate numerous collective agreements (securing qualified employment through placement, compensation for wage losses, training and further education, etc.).

There is uncertainty as to whether the companies will be able to bear these costs: “The trade unions must therefore be involved in the negotiations with the companies and, in addition to possible property compensation, a component for ensure social equality must be provided. If a negotiated solution is not reached, alternative solutions will be needed with regard to the participation of companies and the public sector in securing social equality.” (p. 115)

1.5 Uncertainty for villages and “Hambi”

It is uncertain if more villages will be devastated because there is lignite underground. Uncertainity remains for example in Keyenberg, Kuckum, Berverath, Upper and Unterwestrich around the Garzweiler open pit as well as for Proschim (Lausitz) and Pödelwitz (Central Germany). Investigations by the German Institute for Economic Research (DIW) show that no further villages would have to be dredged because there are sufficient amounts of coal in the already approved open-pit fields.

The opencast mining and power plant operators should be pleased to get planning security and a lot of money for shutting down – a golden parachute this generous is never provided in the normal course of business, only by the government. Selling coal-fired power has been mostly a loss-making business in recent years. If RWE and other operators are now claiming technical and financial difficulties with the decommissioning, this may have to do with the fact that they want to drive up compensation costs. It is noteworthy that the RWE share price has been on the upswing over the last few days with a “buy” recommendation. In several interviews, the head of the IG BCE mining union seemed quite satisfied. Benefits for the employees will include “adjustment allowances” and compensation for pension losses.  “After tough negotiations, we have an outcome that we can work with,” was the shared verdict of German Trade Union Confederation (DGB) board member Stefan Körzell, German services trade union (ver.di) board member Andreas Scheidt and IG BCE chairman Michael Vassiliadis after the Commission’s late-night concluding round.

Criticism is being leveled above all by those who seek to shut down the mining and burning of coal as quickly as possible to protect people and villages at the edges of opencast mines, and by those who want to protect homelands, environment and climate in Germany and worldwide. The exit date 2038 is clearly too late for the climate.  From the point of view of the involved environmental associations (BUND, DNR and Greenpeace), the adopted plan is a minimum consensus that demands a great deal from them. In a joint press release, BUND, DNR and Greenpeace state:

“It would actually take considerably more, above all for the path to 2030. This is the entry into the exit, not more but also not less. The bottom line is that the door to Germany’s phase-out of coal has finally been opened, the first coal-fired power plants will soon be taken off the grid, and Hambach Forest will be preserved.”

With the exception of a minority vote against the symbolically important exit date, the environmental associations accept the report. They are hoping for a revision clause to allow for an earlier phase-out – a review in 2032 is supposed to determine whether the date can be brought forward to 2035. As expected, environmental associations, organizations and actors who were not involved in the Commission are wording their criticisms more sharply. A few examples:

Campact: “The decision of the Coal Commission does not create the peace we had hoped for, but instead continues to fuel the conflict over coal. Leaving coal-fired power plants on the grid for another 19 years, phasing them out far too slowly, is far too little for the climate. This will meet the resistance of the climate movement.”

Ende Gelände: “What the Coal Commission is proposing is not a consensus. This puts the 1.5°C target out of reach. The corporations are getting money for nothing, and the future of Hambi (Hambach Forest) and the villages remains unclear. Another 20 years of coal-fired power is 20 years too many. We will fight this! In Hambi, we made the impossible possible. The protests yesterday were only the beginning, and we’ll be back next Friday.”

Hannelore Wodtke, town councilor of Welzow, was the only participant who ended up voting against the overall report – in particular because the Commission left the fate of the village of Proschim uncertain:

“The rescue of the village of Proschim from resettlement has been overdue for years. Under pressure from the state governments of Saxony and Brandenburg, the Coal Commission leaves the affected people continuing to face an uncertain future. Apparently, Kretschmer and Woidke still let (Czech energy group) EPH dictate their policies.”

For the affected villages, the situation remains uncertain and the question of whether they will need to be relocated may only be resolved in the mid-2020s. 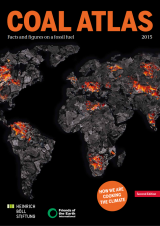 Our Coal Atlas contains facts and figures on the use of coal and its environmental and social consequences. With more than 60 detailed graphics, the atlas illustrates the coal industry’s impact on nature, health, labour, human rights and politics.

4 Origins and history of the Coal Commission

4.1 January 2016: recommendation for the establishment of a round table

In January 2016, Agora Energiewende, an energy think tank, published Elf Eckpunkte für einen Kohlekonsens (“Eleven central components for a coal consensus”). The first recommendation for action: The German federal government should promptly convene a “national coal consensus round table” in order to “reach findings with broad political and social support already in 2016, to ensure ... early planning security for all involved parties regarding the impending decarbonization.” The coal consensus should also include a legally regulated phase-out of coal to start in 2018 and be complete by 2040 at the latest, no new construction of lignite or hard coal-fired power plants, no new opencast mines, the establishment of a structural change fund for the affected regions and electricity price compensation for energy-intensive industry should the exchange electricity price rise unexpectedly.

In June 2018, the federal government moved to set up the Commission for Growth, Structural Change and Employment (Kommission Wachstum, Strukturwandel und Beschäftigung, KWSB). In principle, this is the round table with representatives of environmental associations, trade unions, business and energy associations, the affected regions and scientists that Agora Energiewende had advocated two and a half years earlier.

The Coal Commission was given a mandate to develop a plan to gradually reduce and shut down coal-fired power generation, including a completion date and the necessary accompanying legal, economic, social, renaturalization and structural measures. The plan was to be completed prior to the UN climate conference in Katowice in early December 2018. This timing was intentional: Federal Environment Minister Svenja Schulze was to take the international stage to announce that Germany, the world champion lignite user, is setting a rational course to address climate change. Everyone knows that Germany has been diligently expanding renewable energies and shutting down dangerous nuclear energy. However, everyone also knows that coal is largely responsible for Germany’s failure to meet its climate targets and the stagnation of its transition to renewable energy.

Contrary to what she had hoped, the German Environment Minister went to Poland without a plan to phase out coal. The reasons for the delay, it is universally understood, were interventions by the premiers of Brandenburg, Saxony and Saxony-Anhalt. They had insisted that the report must contain more extensive and detailed structural aid for Lusatia and central Germany. In the argumentation, climate protection, economic development and social participation were positioned as opposing interests. Brandenburg Premier Woidke was not alone in linking possible state election successes of the right-wing populist AfD party to an early phase-out of coal. This is understandable on one hand – at least from the point of view of the premiers, who do not want to lose to the AfD in the upcoming state elections. On the other hand, it is also an argument that plays into the hands of populists, distracts from the premiers’ own failures and ignores the citizens who live on the edge of opencast mines, whose health is routinely impacted by power plants, and whose homeland is being eaten away by the excavators.

The Coal Commission published its report in January 2019 after a delay of about two months. The fact that the Commission is opening the door to the phase-out of coal and proposes mandating it by law was generally welcomed by all parties and the media.