The prime minister and his wife attended a show in Milan’s famous opera house, La Scala, on November 15. It was disclosed neither on Orban’s Facebook page nor through his press secretary what means of transport the couple used to travel there. Coincidentally, one of the airplanes owned by the Hungarian military, which Orban had used several times before for official trips, flew to Milan on the same day.

This article was originally published by Átlátszó.hu, a watchdog NGO and online newspaper in Hungary.

An enthusiastic soccer fan, the Hungarian prime minister missed the Hungary-Estonia match in Budapest to be able to enjoy an opera production in Milan’s La Scala. The official press release revealed that the PM congratulated Kossuth-prize laureate György Kurtág on the debut of his first opera. 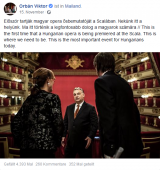 Orbán usually discloses via social media what means of transport he uses during his official visits. However, this time it was not revealed.

However, Atlatszo noticed that one of the airplanes owned by the military flew to Milan on Thursday and returned on Friday.

The airplanes were originally purchased to carry troops

The Hungarian military presented its two newly purchased Airbus airplanes (ID 604 and 605) on the M59 Dezső Szentgyörgyi Air Base in Kecskemét early February. Then defense minister István Simicskó stressed at the presentation that “These aircraft are not for the government. These are official military planes that will be used by the military.”

According to the official site of the military, honvedelem.hu, Simicskó said: “Perhaps it is not an exeggaration to claim that this is a historical moment that every Hungarian citizen, especially the soldiers of Hungary, will rejoice over.”

The purchase of the two used Airbus A319 planes had been announced in December 2017 by Simicskó. The two aircraft were bought from Air Berlin, which was going out of business. The Hungarian Military was secretive about the entire transaction, including the price that was paid.

Simicskó’s assurance that the two planes were exclusively for military use was breached after a few months. Orban flew on board of plane ID 605 to pay an official visits to Israel and Montenegro in the summer, and to Moscow and Salzburg in September.

To add to the confusion, while Orban flew on one of the military plane to Salzburg, Hungarian soldiers were transported to Iraq in a rented plane. Tibor Benkő said the reason for this was that the flight personnel of the Airbus did not have the necessary experience to fly a larger number of passengers that would have been required by the Iraqi mission. Instead, they flew the prime minister.

On July 24, the party Párbeszéd Magyarországért (PM) filed a freedom of information request to find out the cost of Orbán’s trips to Israel and Montenegro. The Defense Ministry replied that the two trips were part of the training of the crew.

“The airplanes have had 200 flight hours since they were purchased. They have transported government officials on official trips for 23 hours, on a total of five occasions, as part of the training of the personnel. (…) The prime minister’s delegations cost HUF 215,000 and HUF 145,000 per person. The rest of the flights fulfilled a national military purpose, and hence were covered from the military budget.”

Átlátszó filed a freedom of information request early September (before Orban’s trips to Moscow and Salzburg) to find out more about the trips of the government delegations using the military planes. The ministry of defense replied that the government officials were transported as part of the training program for the crew.

“Government officials were transported during July 6, 2018 and September 4, 2018. The destinations were Biskek, Podgorica, Stockholm, Brussels, Luxembourg and Tel-Aviv” the ministry replied.

“The delegations comprised 6-33 person, including János Áder. Viktor Orbán, dr. Tibor Benkő and Péter Szijjártó. The international flights and landings in various types of airports served the purpose of training and licensing the pilots of the Hungarian Military.”

Viktor Orban and his circle often use different private jets when they travel the world. Orban’s use of a €56 million private jet was revealed by Atlatszo in September.

This article was originally published by Átlátszó.hu, a watchdog NGO and online newspaper for investigative journalism to promote transparency, accountability, and freedom of information in Hungary. More of their English articles can be accessed here.

Data visualization: this is how the pro-government media empire owning 476 outlets was formed

Infographic
This week 476 media outlets became parts of the new Hungarian media holding controlled by pro-government forces. The name of the mammoth is Central European Press and Media Foundation. This infographic shows you what happened!
By Bátorfy Attila

Interactive feature: follow the luxury jet and the yacht used by the Hungarian governing elite

Tool
The watchdog NGO Atlatszo revealed in September that Viktor Orban and the political and economic elite close to the government are using a €56-million luxury jet and a €21-million yacht. It decided to build an online tool where anyone can track the yacht and the jet in real time.
By Erdélyi Katalin

Analysis
The Hungarian government is financially supporting soccer wherever it can: new stadiums are being built across the country. Besides professional soccer, there is a huge amount of money spent on junior teams and training the new generations of soccer players as well.
By Oroszi Babett