Although ASEAN’s new consensus document on migration is a giant step towards safeguarding the rights of migrant workers, it still sticks to putting skilled professionals and lower-skilled migrants in separate silos.

After the deluge of headlines during ASEAN’s 50th birthday in 2017 and before that, the start of the ASEAN Community in 2016, this year may signal a return to what many see as ASEAN’s return to its uneventful – or boring – ways.

But the year 2017 ended with an agreement in an area of regional affairs that was quite different from ASEAN’s usual deliverables – migration. After much lobbying behind the scenes, the ASEAN Consensus on the Protection and Promotion of the Rights of Migrant Workers was adopted by ASEAN’s 10 leaders at their November summit in the Philippines.

Looking back, the 19-page consensus document got less intensive coverage by the media compared to ASEAN’s agreement with China to proceed with drafting a code of conduct in the South China Sea, as the tensions in those disputed waters dominated much of ASEAN-related coverage in 2017.

Yet migration is an aspect of foreign policy that the some 640 million ASEAN citizens easily identify with, far more than other foreign-policy issues. Using the World Bank figure of some 6.89 million intra-ASEAN migrants in the region, that means that 9.5 percent of ASEAN’s population are migrants. If ASEAN were a single country, that is a pretty high figure. (See: ASEAN can’t leave unskilled migrants out of integration - report)

Addressing migration may well make ASEAN – often seen as being cooped up in its ivory tower – a more concrete and relevant reality for its constituency, and much closer to bread-and-butter issues.

At the same time, ASEAN remains far from a wider understanding of migration. It remains attached to the dichotomy, akin to double vision, with which it views ‘skilled professionals’ and ‘migrant workers’ within the larger issue of easing the mobility of as part of ASEAN regional integration.

Assessments of the ASEAN consensus document on migration differ. Some find it too little and too late; weak because it is not, as originally hoped, a legally binding instrument; or one whose utility remains to be seen.

The consensus on labor migration is a giant step

What may be a small step in other regional or global contexts is a giant step for ASEAN, where an issue can simmer for years before the incumbent ASEAN chair finds enough political muscle to push for consensus. So it was in the case of the 2017 consensus document steered by the Philippines, the world’s largest exporter of human labor and one that has pushed migrants’ rights in international spaces.

ASEAN adopted the Manila consensus a full decade after its ASEAN Declaration on the Protection and Promotion of the Rights of Migrant Workers in 2007 – when it was again the Philippines’ turn to be ASEAN chair.

In short, ASEAN has followed its own pace in dealing with the politically sensitive issue of migration – in sharp contrast to the fact that international norms were set much earlier. For instance, the International Convention on the Protection of the Rights of All Migrant Workers and Members of Their Families entered into force in 2003.

If the 2007 ASEAN declaration on migrants put the matter of migration firmly on ASEAN’s plate, the consensus document pushes further ASEAN’s recognition of the value that migrant workers contribute to its development, their rights, and discusses the need for future action by its member states.

“It is an ASEAN Community commitment, a declaration of solidarity in recognizing inter-ASEAN worker flows, reaffirming the value and the contribution of migrant workers and entitlement to rights and in many ways, a willingness to redress grievances on terms and conditions of work,” Maria Alcestis Mangahas, an expert on labor migration and former deputy regional director for Asia and the Pacific of the International Labour Organization, said in an interview.

Chapter 7 of the consensus document commits ASEAN states, through the ASEAN committee handling migration, to develop an “action plan” on migrant workers’ rights, report on the consensus’ implementation and share best practices in managing migration.

This commitment to actually taking action will be a key factor in assessing the impact of the 2017 consensus. The current ASEAN chair is Singapore, whose theme for 2018 is “resilience” and “innovation”. Singaporean officials have discussed developing a smart cities network, addressing cybersecurity and improving business opportunities, but have not mentioned the action plan on migration.

Still, ASEAN’s norm-setting consensus on migration means it has to keep the conversation going on a clearly cross-border concern that has, for too long, been left to bilateral approaches. Until recently, member states were allergic to discussing migration in a regional setting.

Useful and pragmatic are clauses in the consensus that recognize basic issues such as workers’ rights to be issued work contracts. Receiving states are obligated to prevent “abuses, exploitation and violence” toward migrant workers. Sending states are to take action against problems like the overcharging of recruitment fees, and develop reintegration programs.

But the consensus also shows ASEAN’s limits at this point. It covers just documented migrant workers, thus leaving the majority of the migrant population – who are often undocumented - out.

At various points, the document sounds torn between picturing migration as a socio-economic and development issue and as a security and legal one – reflecting the larger conceptual challenge that ASEAN has yet to address when it comes to locating migration with its brand of development. In fact, ASEAN has not endeavored much to define a common vision of development over the years.

On the one hand, the ASEAN consensus talks about the “shared and balanced responsibilities” of receiving and sending states, while recognizing migrant workers’ contributions to economies and societies. On the other, it covers only “migrant workers who are documented and those who become undocumented through no fault of their own”.

As Mangahas put it: “Receiving countries will acknowledge rights and provide redress for legally employed workers but are firm in denying similar rights to the undocumented.”

Asked if ASEAN has shown signs of taking a larger view of migration, Mangahas remarked: “The document is quiet on the scale and categories of migration. At least the document does not specify rights only to the high skilled.” She added: “I don’t think it is designed to convey or advocate for a wider understanding of migration.”

The Mekong Migration Network points out that the economic contributions by migrant workers come from both professional ones as well as low-paid workers, yet ASEAN governments keep them in separate silos. “While ASEAN is moving towards easing restrictions on the movement of professional workers in the region, migration policies for low-paid workers, who are the majority of the work force in the region, remain restrictive,” it said in a January statement.

How can ASEAN reconcile its goal of economic integration and community building with its inability to shape a labor policy or vision that acknowledges the reality that both skilled professionals and largely unskilled migrant workers make up its mobile populations?

Meantime, some common views about the impact of labor migration in ASEAN are being challenged, including in the World Bank report ‘Migrating to Opportunity’ in October 2017. It says that having more migrant workers has not pushed down wages in the receiving communities, that lowering barriers to mobility would make ASEAN migrants better off, and that what is often seen as a loss through ‘brain drain’ may be more of “brain circulation” that benefits countries.

Migration facilitates economic integration, it argues. “Workers must be able to move across jobs, sectors and even countries in order to take advantage of new economic opportunities,” the report said.

In truth, even the part of labor mobility that was politically easier for ASEAN to take on – the movement of skilled professionals in the ASEAN Economic Community blueprint through mutual recognition agreements – is not exactly going smoothly, or fast. In many ways, it is akin to opening a door knowing that few people can walk in.

ASEAN governments and bureaucracies have provided for quite a lot of steps before those in the seven highly-skilled professions included in the easier-mobility schemes – from doctors to accountants – can live and work in another ASEAN country. Only one line of work, that of tourism professionals, has the most straightforward process of recognition of qualifications, meaning that the qualifications acquired in one’s native country are automatically recognized in another ASEAN country, says the report ‘Open Windows, Closed Doors’ published by the Asian Development Bank in 2016.

These ask us to look deeper into how our societies look at migrants and mobile populations, and their place in a more regionally integrated ASEAN. Initiatives in the public space, such as the Bangkok-based SEA Junction’s ‘ASEAN Peoples in Flux’ program that features discussions ranging from student mobility to the Rohingyas’ situation to short videos done by urban refugees, help push awareness of communities that can be invisible in ASEAN’s thriving economies. In collaboration with Heinrich Böll Foundation Southeast Asia, the program focuses on ASEAN’s double standard in facilitating the movement of high-skilled labor while limiting the migration of ‘unskilled’ workers.

Haste and radical action may not be the strongest suit of an inter-governmental association like ASEAN. But the needs of its own ASEAN Community project may not allow another decade to pass before Southeast Asia’s regional grouping has to come to terms with the migrant workers – who are part of the human side of foreign policy – in its midst.

This article was originally published in Reporting ASEAN on January 25th, 2018

50 years of ASEAN – Still waiting for social and ecological justice

The Association of Southeast Asian Nations turns 50. Our dossier sheds light on the develpoment of the institutional framework of ASEAN and looks into the realities of the people - including podcasts, infographics and photos. 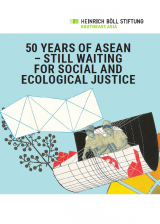 50 Years of ASEAN – Still Waiting for Social and Ecological Justice

In 2017 ASEAN turns 50. This book collects all articles of our dossier "50 Years of ASEAN" and analyzes the institutions of ASEAN - their history, dynamics and policies.

The Future of Forced Migrants in ASEAN

How ASEAN deals with forced migrants shows in how far it is actually people-centered and people-oriented. This vulnerable group used to be integrated in the past. However, today it appears integration efforts are not truly inclusive.
By Andika Ab. Wahab

ASEAN Identity, now and into the future: the interaction across borders in Southeast Asia

Southeast Asia is a patchwork of networks, life-worlds, trading systems and cross-cultural pathways of human interaction. These interactions have always existed in different shapes, as a look to the rural borderlands shows.
By Farish A. Noor