The Rotating G20 Presidency: How do member countries take turns?

On 1 December 2016, Germany became the host and President of the G20 and began to work within the so-called G20 Troika, which in addition to itself consists of the previous 2016 G20 President (China) and the subsequent 2018 President (Argentina).

Each year in December, a different G20 member country assumes the presidency of the Group. On 1 December 2016, Germany became the host and President of the G20 and began to work within the so-called G20 Troika, which in addition to itself consists of the previous 2016 G20 President (China) and the subsequent 2018 President (Argentina).

As an informal group, the G20 has no permanent secretariat. The summit and the preparatory processes – often including more than 60 ministerial and working group meetings per year – are coordinated by the respective host country.

The president is chosen through a system of rotation. To this end, the 19 member states of the G20 (the 20th member being the EU as a whole, which is not part of a country group) are divided into five groups, consisting of a maximum of four states (see graphic below). 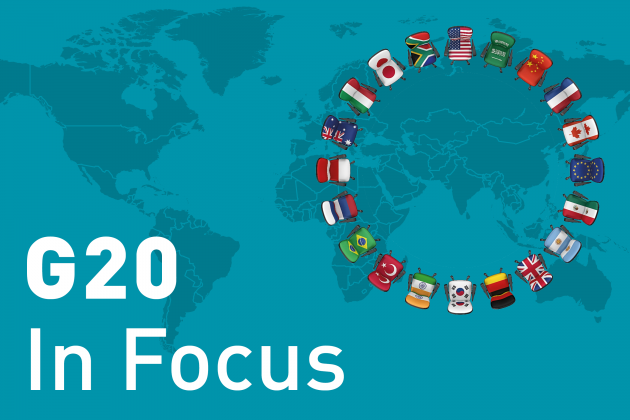 Find out more about the individual countries that are part of the G20, about specific themes, and about the G20 engagement groups.

➨ Podcasts, Videos and Publications in our special "G20 in focus".

The country groups are predominantly organised on a regional basis: that is, nation states from the same region are usually placed in the same group. Only two country groups deviate from this regional approach; they are group 1 (Australia, Canada, the USA and Saudi Arabia) and group 2 (India, Russia, South Africa and Turkey).

Every year, the G20 selects a country from another group to be president. This principle was introduced in 2010, when South Korea held the G20 Presidency.

With the exception of 2009 and 2010 when there were two Summits per year, the G20 has held one annual Summit, usually between September and November. There have been exceptions; for instance, Canada (2010) and Mexico (2012) convened the Summit in June.  Germany will convene its Summit in July 2017 in Hamburg.

What in the World is the Group of 20? Five Things to Know about the G20 - Heinrich-Böll-Stiftung

Negotiation by countries within and among groups

Within a group, all countries are eligible to take over the G20 Presidency when it is their group’s turn. Therefore, the states within the relevant group need to negotiate among themselves to select the next G20 President. Counting Germany, eleven of the 19 G20 member countries have presided over the G20.

Sometimes there are also intra-group negotiations about which country in the group should assume the next presidency. Thus, for the 2018 presidency, it is group 3’s turn, with Argentina, Mexico and Brazil as contenders.  Mexico had already hosted the summit in 2012 and, since Brazil slid into a national crisis in 2016, it did not wish to take over the G20 Presidency. Therefore, Argentina was chosen.

Macri succeeded in not only his bid to preside over the G20 in 2018, but also his bid to host the WTO Ministerial Conference in 2017.  Thus, he has powerful platforms to present his visions and plans.

However, Argentina had to fight off interest from India in order to win its bid.  Because Argentina’s elections took place in December 2015, there was a delay in the country’s claim to the G20 Presidency.  Therefore, in early 2016, India’s Prime Minister Modi made a bid to host the 2018 Summit.  But, after Argentina’s new President, Mauricio Macri, took office, he stated that he was not prepared to swap with India.  Therefore, in mid-2016, the Indian government had to withdraw both its ambitions and its plans.

The timing of elections may determine the choice of a country to preside over the G20 as well as the date of the Summit. In 2019, the President will be selected from group 2 comprised of India, South Africa, Russia and Turkey.  The latter two countries have already hosted a G20 Summit. One reason that India’s Modi made a bid for the 2018 G20 Presidency was because, in 2019, there will be parliamentary elections.  Therefore, the Indian government is already negotiating with the South African government to determine which government will preside over the 2019 G20.

In 2017, Germany is faced with hosting the G20 in an election year, which is why its summit will take place in July instead of later in the year, as is customarily the case.  While German Chancellor Angela Merkel’s highest priority will be the federal election, she will be deeply engaged in leading the 2017 G20 process – not only for the sake of the G20, but also for ways that her leadership of the G20 will affect her party’s position in the elections.

This article is part of our dossier "G20 in Focus".