Loss and damage at COP22 – how do we top Paris?

Loss and damage is when climate change goes beyond what it is possible to adapt to such as typhoons or frequent droughts. The Paris Agreement made progress on those issues. COP22 in Marrakesh should now clarify the question of loss and damage finance.

COP22 in Marrakesh was originally going to be the “loss and damage COP”, but progress on loss and damage at Paris gives us the opportunity to rethink Marrakesh, ensuring that we make the right steps forward.

A quick background on loss and damage

It took a long time for rich countries to agree there was loss and damage. They kept wanting to bundle loss and damage (and the finance that it will need) in with adaptation. But at Paris, due to the effective advocacy of the countries on the front line of climate change, including Tuvalu, Maldives, Gambia, Bangladesh and the Philippines, great diplomatic steps forward were made.

Progress was made in Paris

The other big win from Paris was recognition that loss and damage would need “support” (aka finance) from the international community (Article 8.3).  The real reason that we had been fighting over loss and damage for so long, was that rich countries didn’t want to pay for the climate damage from their pollution – so this is a big deal.

The third win is that the Paris Climate Agreement enshrined the WIM (Warsaw International Mechanism for Loss and Damage associated with Climate Change Impacts) as the UN body that deals with loss and damage, and gave it a beefed up mandate. In many ways this is what took the wind out of the sails of Marrakesh as the ‘loss and damage COP’. The review of the WIM, due in Marrakesh, was originally seen as a tussle between those who wanted to kill the WIM and those who wanted it to have an enhanced mandate and bring it out from under adaptation.

What has to happen now

These wins at Paris means that countries can take the opportunity of Marrakesh to actually do a real review of the WIM. What does that mean?

The review of the WIM must lead to more resources – political and financial – so that it can get more done. It has been working well for the last year, but far, far too slowly given the scale and urgency of the problem. It has started to organise work on some areas, for instance displacement and risk transfer, but it has done almost nothing on providing support (finance) for countries and communities facing loss and damage.  At Marrakesh countries need to acknowledge this, and commit a bigger budget to the WIM and to offer to help it in any way they can, including with political support.

The ‘framework for a five-year workplan’ that the WIM has put forward has a bunch of great stuff in it … possibly! Facilitating support (finance) to address loss and damage is the number one item in their self-described function. This is great, because it needs to be their number one priority.  But in the framework for the five-year workplan “finance-related topics” gets a “placeholder” only. Given how urgent the need for loss and damage finance is – this work needs to move far more quickly.

We need loss and damage finance

To start with we need a definition for what loss and damage finance is. The Standing Committee on Finance (SCF), the UNFCCC’s uber-body on climate finance, has a definition of climate finance[1] that only covers mitigation and adaptation and does not include loss and damage. The WIM and the SCF need to work together to agree a definition that does not in any way undermine adaptation finance. Both are essential – but they are not the same thing (as recognised in the Paris Climate Agreement).

The third step – which must happen in parallel to the first two – is that we need to start exploring how we’re going to raise the loss and damage finance we know is needed (conservatively, we need at least $50 billion a year). At COP22 countries should mandate the WIM and the SCF to explore options and come back with a plan to raise funds for loss and damage. There are proposals for raising loss and damage finance from innovative sources (such as aviation levies or a fossil fuel levy) that could raise more than $50 billion annually from the polluting industries causing the climate crisis. COP23 should consider these options, and then put in place concrete steps to raise funds for loss and damage. This way the international community can live up to its responsibility to support the most vulnerable people facing the worst impacts of climate change. After all, they have done nothing to cause the climate crisis.

[1] “Climate finance aims at reducing emissions, and enhancing sinks of greenhouse gases and aims at reducing vulnerability of, and maintaining and increasing the resilience of, human and ecological systems to negative climate change impacts.”, p5, UNFCCC Standing Committee on Finance 2014 Biennial Assessment and Overview of Climate Finance Flows Report

Morocco must breathe life into the Paris Agreement

The UN climate summit in Marrakech from 7 to 18 November, is the crucial next step for operationalizing the Paris Agreement. Many controversial issues such as damages caused by climate change and financing for the poorest countries are on the agenda.
By Lili Fuhr, Liane Schalatek and Simon Ilse 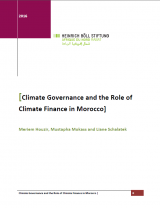 Climate Governance and the Role of Climate Finance in Morocco

As a country very vulnerable to climate change impacts, Morocco, the host of COP22, has very high climate ambitions and has taken on a global leadership role in committing to a renewable energy future. This study explores what role climate finance has played to allow Morocco to act as a trendsetter and how its climate finance governance can be further improved.