A study commissioned by the Heinrich Böll Foundation found that the OECD's infrastructure investment advice to the G20 finance track lacks coherence with sustainable development and is “out of sync” with recent achievements of the global community.

As global growth has stalled over the last few years, the Group of 20 countries (G20) has made infrastructure investment a centerpiece of its policy work, expecting that massive infusions of investment would reinvigorate economic growth and advance job creation and development. Collectively, the G20 – which dubbed itself “the premier forum for our international economic cooperation” – has launched infrastructure and investment initiatives; individually, some G20 member countries have worked with partners to create one new infrastructure institution or initiative after another, such as the China-led Asian Infrastructure Investment Bank (AIIB).

There is no question that infrastructure development is crucial; it acts as a gateway to natural resources and markets, powers industry, and provides key services to citizens around the world.

Recognizing that the G20 has been turning to the Organisation for Economic Co-operation and Development (OECD) for policy advice in this area, the Heinrich Böll Foundation commissioned the Institute for Human Rights and Business to review key OECD submissions to the G20 on infrastructure investment to see if they are coherent with sustainable development policies. The result of this research, entitled “In Search of Policy Coherence: Aligning OECD Infrastructure Advice with Sustainable Development” by Motoko Aizawa and Waleria Schuele (IHRB) is being released to coincide with the OECD’s Global Forum on Responsible Business Conduct in Paris this week.

The trajectory of OECD advice is concerning, since there is a high price tag on the G20’s proposed mega-projects, especially in energy, transport and water sectors. Many sustainable development and climate goals will be unachievable if the G20 does not urge financiers to harness infrastructure development to meet these goals. It doesn’t end there - the G20 member countries themselves are financiers not only in their own right, but also through their role as major shareholders in multilateral development banks.

The research also exposed the fact that the content of the OECD’s infrastructure investment advice is often out of date, overly protective of the investor (but not ordinary citizens), much of which is recycled from one publication to another. There is little reflection on the ongoing broader policy debate around investment policies, contracts, and settlement of disputes, among other things.

We assume that this state of affairs is in part due to the OECD's silo culture that separates work in one policy area – investment – from work in another – sustainable development. Meanwhile the efforts of the OECD Secretariat to eliminate these silos through "horizontal" and cross-cutting analysis is having little appreciable effect when it comes to the OECD engagement with the G20 (especially its Investment and Infrastructure Working Group). While OECD’s policy advice on infrastructure investment seems to be frozen in time, other parts of the OECD have moved on – see, for example, the OECD achievements in the area of Responsible Business Conduct, which is the focal point of the OECD gathering this week.

Although the OECD's silos are famous, they are actually a mirror image of the G20 silos. There is a huge discrepancy between the “finance track” and the “Sherpa track” in the G20. Tasks related to sustainable development appear to get relegated to the less influential Sherpa track, which is comprised of representatives of the G20 Leaders. The powerful finance track, which is run by G20 finance ministers and central bank governors, deals with high priority policies, including infrastructure investment.

This strange alignment of interests may actually help the OECD serve the G20; the G20 in turn reciprocates by allowing the OECD to enjoy cozier ties with the G20. However, this alignment potentially undercuts the global goals and commitments made by the 194 countries of the UN, including the 34 advanced economies that are members to the OECD. The OECD’s membership includes eleven G20 member countries and excludes eight. (The 20th member of the G20 is a region, the European Union.)

If the OECD does not change the trajectory of its policy advice, it risks being a partner on the G20’s self-delusional path to infrastructure investments in mega-projects, with serious consequences to the public budgets, citizens, and the natural environment. These projects have been shown to come in “over budget, over time, over and over again” according to Bent Flyvbjerg of the Said Business School at the University of Oxford, who has one of the biggest databases of megaprojects in the world. Such a pathway promotes incoherence with countries’ own sustainable development aspirations and important targets and goals set under hard-won global consensus.

The OECD needs to stop and think hard about how to provide infrastructure investment advice that is coherent with sustainable development and that reflects the current work of other multilateral organisations, experts and stakeholders. It must also take strong measures to set its relationship with the G20 on a new path. The OECD Members should support the organisation’s transition to its new pathway, not hinder it.

The G7 meeting in Japan recently released the Ise-Shima Principles for Promoting Quality Infrastructure Investment. The Principles’ headlines include sustainability, resilience against disasters, management of social and environmental impacts, and ensuring alignment with economic and development strategies including aspects of climate change and environment at the national and regional levels. While it remains to be seen how these Principles will be implemented by the G7 countries, it can be the start of a new pathway toward coherence with sustainable development, if the OECD (which is led by the G7, among others) embraced a similar approach when engaging with the G20.

There are opportunities ahead for the OECD to demonstrate a different pathway: first, with the Chinese G20 Summit in September and, then, later this year, when Germany takes over the G20 presidency from China. We call on Germany to fulfil its obligation to work with the “kingpins” of the G20 finance track to promote coherence with its own work in the G7, not to mention its commitments to sustainable development and climate goals. 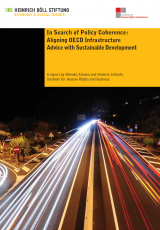 Refugees are holding up a mirror to Europe

Opening remarks on the occasion of the "EU Quo Vadis?" Conference of the Heinrich-Böll-Stiftung in Berlin on May 26th, 2016 titled "Crossing Boundaries in European Asylum and Refugee Policy".
By Ralf Fücks

The Panama Papers and the International Battle Against Tax Havens: Lessons for the EU

The collaborative publication of the Panama Papers in the first week of April revealed in an unprecdented level tax evasion via the Panamanian lawyer’s office Mossack Fonseca -  this article examines lessons for the EU.