How can trust be built when 16.000 weapons of mass-destructions are faced to each other? Anda Serban is the Coordinator of ICAN Romania and reflects on her experiences with lobbying.

I am a Political Science and Security Studies graduate in a country where most of the academics still preach deterrence. I knew before being introduced to ICAN, that something must exist in the world that speaks about the catastrophic humanitarian consequences of nuclear weapons and counters the deterrence theory. Sometimes it might get frustrating to have a dialogue with someone who is biased on an old, narrow view bringing forward solely state security strategy arguments, which can clearly cannot solve current security issues. But we, the civil society, are here to stay and fortunately, we have great allies.

Just a few years after the Humanitarian Impact of Nuclear Weapons (HINW) language has been introduced in the disarmament fora, we have reached a majority of countries speaking about “filling the legal gap” in nuclear disarmament. Some countries may admit that they have known all about the humanitarian catastrophic consequence of nuclear weapons for decades, so the discourse did not actually change. Maybe this is even more frightening to think of, if you consider it. But things have started to change for the better and now, 159 countries are behind the Humanitarian Statement delivered by Austria at the Review Conference of the Non-proliferation Treaty. Some of them are endorsing the Humanitarian Pledge (formerly called Austrian Pledge), we are therefore sailing within the momentum for delegitimising nuclear weapons, a momentum that we have to take advantage of.

A few answers are clear when referring to the question “Can NATO ban the bomb?”: There is no written legally binding phrase in any NATO statutory document that forbids member states from taking part in negotiations on a ban treaty of nuclear weapons or supporting a world free of nuclear weapons. Moreover, NATO it is still just a military alliance, and the fact it is sometimes called a nuclear alliance is just because that is part of an urban military language. There are plenty security issues that NATO faces where deterrence is unable positively contribute. Even more, in a world with financial struggles, any security allowance must be wisely redirected to combat actual, immediate security threats, not being misused for keeping an entire planet under the threat of a nuclear war.

On the other hand, thinking of solutions, non-nuclear NATO countries can act within the alliance: They could

I have to underline the 2nd point, because I am afraid some countries are currently too willing to show their total support for NATO policies. In a scenario where some non-nuclear NATO states will refuse nukes on their soils, others might gladly welcome it on theirs. And that will just be a step back on any disarmament efforts.

International negotiations and diplomacy - and human relations as well - are based on trust. But how can trust be built when 16.000 weapons of mass-destructions are faced to each other? With or without nuclear states, a ban treaty will be signed by countries who believe the time has come for a world free of nuclear weapons.

But for this to happen we need grass-root support and educated people and diplomats to be open for dialogue. And for each of the above mentioned, ICAN Romania has built a dedicated pillar: We have created awareness campaigns for increasing grass-root support, designed educational programs tailored for children, students or other interested parties, and we are constantly engaging with diplomats for discussing on how Romania can move forward in nuclear disarmament negotiations.

The time has come to support and follow champion states in nuclear disarmament and we are looking forward to see how the legal gap will be filled after this clearly unsuccessful disarmament Review Conference of the NPT.

Part II: On being part of civil society to a semi-close forum. And overcoming other frustrations

Lobbying is fun. Following and reporting on nuclear disarmament negotiations is even more fun and the first days of the 3rd week of the Review Conference of the Non-proliferation Treaty (NPT) clearly showed that. But fun does not always mean productive.
I was lucky enough to be able to follow the negotiations for nuclear disarmament in different environments, starting with the Preparatory Committee for the Review Conference of the NPT, to open-ended working groups of the General Assembly of the UN on taking forward multilateral negotiations for nuclear disarmament, to the Conference of Disarmament and to Conferences on the Humanitarian Impact of Nuclear Weapons in Oslo and Nayarit. I can now say that there are clear improvements on how civil society is now seen and welcomed by each of this environments.

But before getting into any details regarding the collaboration with civil society at the Review Conference of the NPT, I must emphasise the importance of academics and civil society within any international negotiations. Without forgetting to apply the humble filter, I do believe we have better international policies for humankind due to the knowledge from the academics and the pressure directed by civil society on all these issues. We all know how political-will works, sometimes a topic needs to hit the public agenda and be hijacked by party, other times you need a pressure group to start the dialogue and raise attention on a certain topic.

Nonetheless, given the great amount of information and issues around the world, one must make sure the diplomats also remain focused on an issue. And here is where civil society gets involved. Just take a moment and imagine topics such as freedom of speech, gender equality, discrimination, world health, hunger, climate change, education or child protection without any input from civil society. Or if you need an alternative proxy as an example, take the Mine Ban Treaty. These are all examples of the great work of civil society.

The case of the HINW Conferences might be seen as a best practice example on how civil society and governments can work together to achieve a common goal in nuclear disarmament. In this particular case,  civil society not only brings information to the table, but also offers logistical and operational support to governments in settling the best environment for negotiations. And if someone still raises the question “Is civil society useful for international negotiations?” he or she will be advised to take into consideration all the small and economically challenged countries, who can not afford staff members to follow all the disarmament discussions, but can instead receive valuable contribution, as well as a comprehensive view on the matter out of the collaboration with international civil society.

To shortly point out the situation of civil society within the NPT process, imagine two categories of beings, that are supposed to work together, but have totally different access points. One party has reduced and constantly verified access to the room, almost no access to formal discussions and totally no access to the most substantive negotiations. Yes, we can work with that too, but the process and the facilites are clearly not organised in a welcoming manner for outsiders. And unfortunately, even if a majority of countries rely on our work and help, for the organisational issues per se, civil society is still an outsider. But there is a positive part too. Countries have started to have members of civil society in their delegations. And maybe disarmament can take the example of other topics such as climate change, and make a habit out of it.

Being part of civil society is different for each part of the world. In some countries you have a legacy of established communication between officials and civil society, or a strong public confidence in NGOs, in other countries civil society is blooming as we speak. In some parts of the world financial support comes naturally from crowdfunding, while in others parts you need to rely on just a few donors. Someplace NGO members are seen as experts, while somewhere else they need to struggle for their expertise to be recognised. The situation and the way of work might be different, but our goals are the same everywhere and as powerful as ever right now.

Can civil society make a strong difference in the disarmament process? One of the most progressive countries in nuclear disarmament is now nicknamed “civil society”, so I guess the answer to the questions is yes. We must always remember that a strong civil society with open communication channels with officials can move the world forward.

Nuclear disarmament has long been a distant issue in the life of Philippinean peace advocator Loreta Castro. Over the last two years of involvement she began to see it as an urgent imperative.
By Loreta Castro 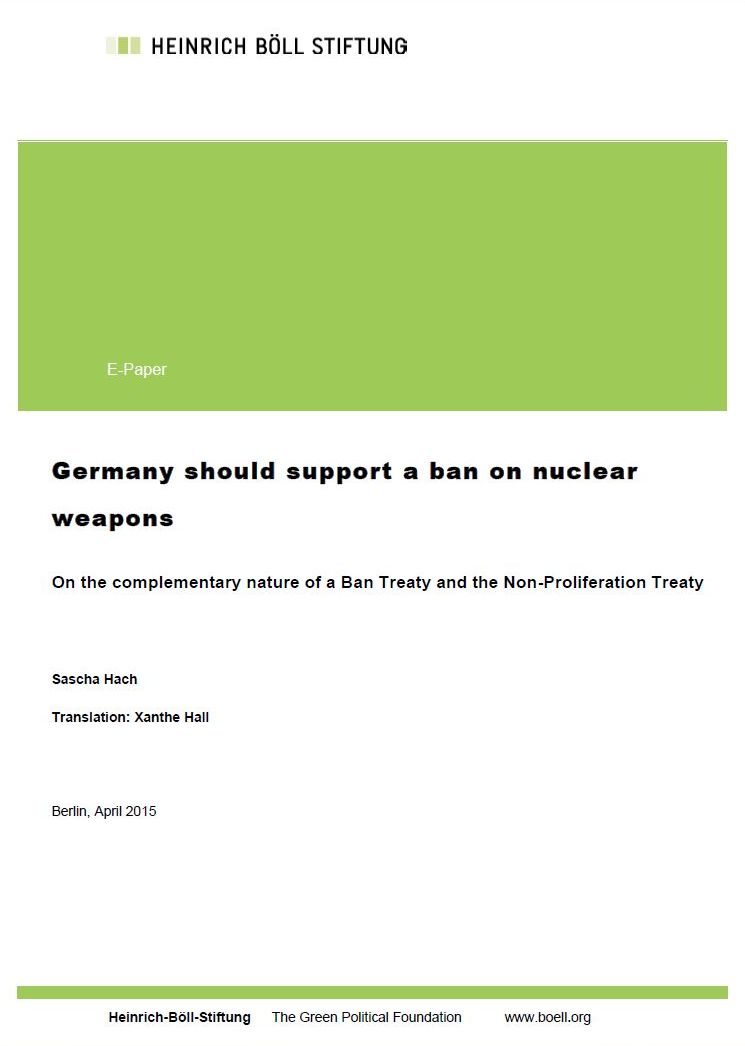