On the Run in Their Own Country

More than six million Syrian refugees are in search of a different, a safer place in their home country and yet only arrive at places that are currently slightly less ghastly.

It belongs to the peculiarities of the war in Syria that foreign journalists must choose early on which side of the front line they want to report from. Even prior to it, they were severely restricted in their movements in the authoritarian state. With the uprising of the revolution only “convenient” journalists were granted visas and it was ensured that they only came to know what they were supposed to find out and disseminate. This is one of the reasons for which only sparse news coverage of internally displaced persons in Syria exists.

Virtually half of the Syrian population is on the run. Turkey and Jordan took measures at an early stage in order to restrict the inflow of Syrian refugees and, since the beginning of 2014, Lebanon, until then the only neighbouring country to keep its borders open, has also been taking steps to become more and more restrictive. Palestinian refugees from Syria were the first to be denied entry, since autumn this also affects more and more Syrian citizens. However, the majority of displaced persons, more than six million, are on the run within Syria.

It is not only the border controls that prompt many to still seek their salvation in Syria. Many do not see any perspective for themselves outside of the country. Reports on the conditions in refugee camps and the precarious situation that awaits them abroad cause some to shy away from this option. Others fear that if they go too far away, they might unintentionally burn their bridges. It seems as though more and more people leave their provinces in order to escape to the places that are currently less ghastly.

“A family from Homs told me they had phoned their old house, with the ringing in the earpiece during the call making it sound like they had never really left. They were startled when, one day, their call was answered: a family from Aleppo had sought refuge in the house. ‘You’re not forgetting to water the flowers, are you?’ they asked them,”

documentary filmmaker Liwaa Yaziji tells us. She has made a documentary named “Haunted” with the support of the Heinrich Boell Foundation, centring on the lives of nine individuals who are either internally displaced in Syria or seeking refuge in Lebanon. “Another woman told me that she was angry at first when she found out about the presence of strangers in her house. However, she later even disclosed to them where she had hidden food rations for hard times.”

“We are considering leaving our apartment in Damascus to a friend,” Rami says. “But it is still full with our things, there’s not even enough space for wardrobe. When we left in 2013, we didn’t think it would be forever.” Not everyone is as lucky; the possessions of many others do not stay untouched during their absence. “I had bought myself a house in 2010,” Sana, who still regularly pays visits to Syria, recalls, “But the regime seized it and converted it into a command centre.” Immediately after the unsuccessful Geneva II negotiations in the beginning of 2014, the regime circulated a list with the names of opposition members, whose apartments were to be confiscated.

The Syrian regime oftentimes dealt generously with refugees of other conflicts. The Palestinians that arrived in Syria in 1948 could not only build up a livelihood, but also a new life, less troubled than in other parts of the Arab world. When in 2003 more than one million Iraqi refugees surged into Syria, the regime accommodated them in many respects. During the time of Israeli attacks on Lebanon in 2006, the regime opened vacant public buildings to refugees. However, even though it now does not dispute the number of more than six million IDPs – in the regime’s version of events a consequence of the uprising, not of its suppression – it does not feel compelled to help them. Assad likes to talk about “terrorists”, which is what he regards all dissidents to be, but displays of solidarity with the victims are rare, not to mention practical help. In May 2014, the ministry of justice seriously considered renting out the abandoned houses of those who went abroad to IDPs – the provisioning of one refugee group at the expense of another, inclusive of a bonus for the regime.

There are many reasons to flee and the expansion of the terror militia ISIS in northern Syria and the air strikes of the international coalition have added even more. More than 170,000 refugees crossed the border to Turkey in the space of only a few weeks. Yet these millions of people do not flee from ISIS alone. Already in 2011 the regime pulled the carpet out from under the feet of those who had viewed it as a guarantor of security, by, despite having its own massive security apparatus, founding the so-called Shabiha who vitiated any form of legality by murdering, raping and plundering.

At a larger scale, the continued regime air strikes in areas that are no longer in its control are what drive Syrians out of the country. Barrel bombs that are deployed in densely populated neighbourhoods have claimed the lives of tens of thousands - and have rendered entire residential quarters in Homs, Aleppo and other localities uninhabitable. Taking the cynicism to a new peak, UN-Habitat has awarded the “Render for Homs” team of architects a prize for their design for “social housing”. In Homs, housing is a desperate need; the area in question is now 90 percent destroyed,” the project description reads. At no point is the circumstance taken into consideration that most residents died when their houses burnt down and that the survivors have few reasons to return.

Despite many reports on the economic crisis in Syria, the neglect of IDPs is no question of money. October 2014 saw the grand opening of a flashy new shopping arcade (worth 40 million euros) in Tartous, which irritated even committed regime supporters.

Syrian Refugees in Numbers
Over 3 million Syrian refugees are registered abroad, 1,1 million of which are in Lebanon, a country with a population of only 4 million (not including the 400,000 Palestinian refugees). More than 1 million are accounted for in Turkey and 620,000 in Jordan. The actual numbers are presumably significantly higher in all countries, as not all of them are registered. The number of IDPs is estimated between 6,4 and 7 million. The Syrian population is thought to have been approximately 21 million before 2011.

To Stay or to Leave? No Escaping the Hopelessness in Syria

An international conference on the situation of Syrian refugees has been arranged for 28th October in Berlin. Yet in view of the magnitude of the crisis, this is a mere drop in the ocean. Western states keep concentrating on ways to ease the symptoms of the crisis which they cannot gain control over without political underpinning.
By Bente Scheller

Keynote: The Delimitation of the Conflict in Syria

How does the “Islamic State” change the perception of the conflict in Syria? An overview of recent developments and power constellations in the region.
By Bente Scheller 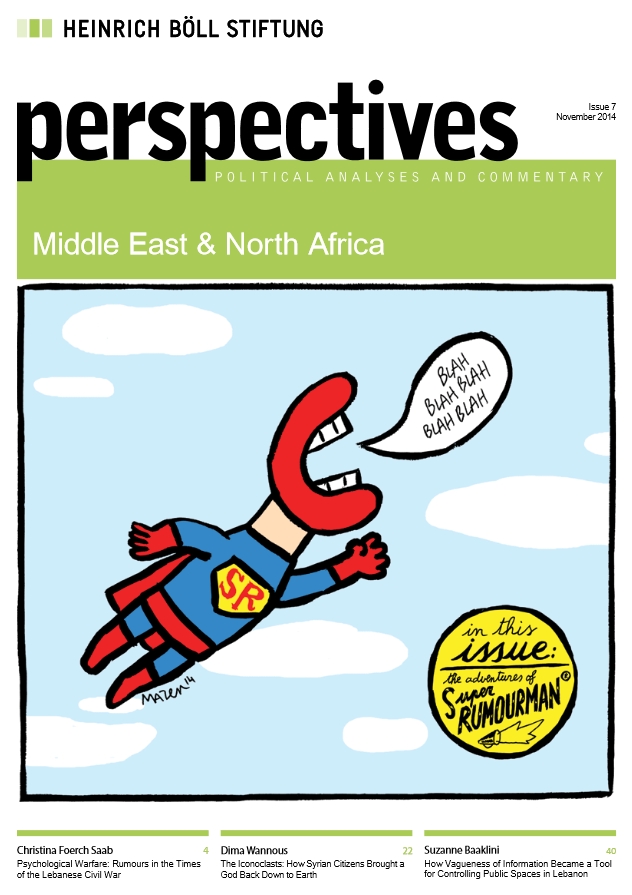 Rumours serve as a medium through which unfulfilled hopes or unspecific fears can be voiced. They bond and drive a wedge between people and population groups at the same time. An issue about the social function of rumours.