Rising demand for organic products in Europe is a market opportunity for producers and the food industry. But farmers need help to switch from conventional to organic, and to stay organic in face of market pressures inducing them to switch back. The Common Agricultural Policy offers some support – but not enough.

In marked contrast to conventional agriculture, organic farming avoids using synthetic chemical pesticides, easily soluble mineral fertilizers and genetically modified organisms. Livestock raisers must comply with strict rules as to the types of feed they use, and their animals must have access to paddocks and grazing areas. In organic production, the farm is regarded as an integrated ecosystem in which the various elements are maintained in balance with each other. Within the European Union, organic products are produced in accordance with EU legislation. But within each country, organic farming associations may in addition set their own private standards. These are often stricter than the EU rules. Because it uses limited resources judiciously and strives to reduce its impact on the environment, organic farming provides significant benefits for the environment and society.

In Europe as a whole, organic agriculture accounts for 2.7 percent of the farmed area; within the EU, the figure is 6.7 percent. The highest shares within the EU are in Austria (21.9 percent), Estonia (18.9 percent) and Sweden (18.0 percent). The countries with the largest absolute areas of organic production are Spain (2 million hectares), Italy (1.8 million) and France (1.5 million). Italy, France and Germany are the countries where the organic area increased most between 2015 and 2016: in Italy it rose by 300,000 hectares, in France by 215,000 hectares, and in Germany by 160,000 hectares.

The expansion of organic farming in the EU can be attributed to two factors: strong demand from consumers, and government support. Between 2000 to 2016, the per capita consumption of organic food in the EU almost quadrupled, reaching an average of 60.5 euros per person in 2016. During this period, for the EU as a whole, the market for organic food grew by between 5 and 19 percent a year. In Germany, the world’s second largest market for organic groceries, 10 billion euros worth of organic products were sold in 2017: that represented a market share of over 5 percent. At over 10 percent, Denmark had the highest market share for organics in the whole world.

The EU and its member states support organic farming through targeted subsidies drawn from Pillar II of the Common Agricultural Policy, which deals with rural development. Organic farms automatically fulfil the environmental requirements for direct payments. For the EU as a whole, an average of 6.4 percent of the budget for agri-environmental and climate measures goes to organic farming. But this figure masks a wide range, with expenditure varying from one country to another: from just 0.2 percent in Malta to as much as 13.2 percent in Denmark. The Netherlands is the only country that does not make any specific area-based allocations for organic farms from the agri-environmental and climate budget; it instead focuses on policies that aim to strengthen the competitiveness of the organic sector.

The support for organic farming distinguishes between premiums for farmers who convert to organic farming, and subsidies to encourage them to maintain organic production. Support also varies according to the land use, stocking density and crop types. The levels also differ from country to country. Denmark promotes lower applications of nitrogen fertilizer (up to a maximum of 60 kg per hectare), while Hungary offers more support for land used for grazing than for meadows that are mowed. In 2015, the subsidy for maintaining organic grassland ranged from 43 euros per hectare (Sweden) to 545 euros (Estonia). For arable land, rates ranged from 90 euros (United Kingdom) to 600 euros (Slovenia). For vegetable production, the range was 184 euros (Denmark) to 900 euros (Belgium and Cyprus). 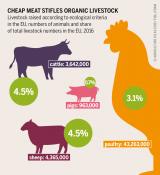 Although organic farming has increased in importance over the last three decades, it is unable to satisfy consumer demand. The Common Agricultural Policy should be reoriented to promote organic farming through national strategies that cover the entire value chain, and via targeted use of subsidies for agri-environmental and climate measures. In June 2018, the European Commission proposed to continue supporting organic farming in the coming budget period through area-dependent payments to meet the EU’s environmental, climate and other management commitments. It remains up to the member states to decide whether and how they promote organic farming. The level of future support will depend on the extent to which the new-look Common Agricultural Policy will reward the concrete environmental services of agriculture.

Article
Like all industries, agriculture is subject to economies of scale. But larger farms have a smaller workforce and can be a bigger burden on the environment if they employ industrial methods, compared to the low-input systems that have traditionally dominated rural landscapes. It is time to shift policies towards preserving jobs and communities, being kinder on the environment, and encouraging young people to take up the farming profession.

Article
People often say that there are fewer birds and insects now than there used to be. That is true, and intensive agriculture is largely to blame. Despite some lip service paid to the necessity of nature conservation, the overwhelming weight of European agricultural policy is to promote yet more intensification.

Dossier
The Agricultural Atlas provides on 50 pages with numerous figures data and facts about Europes agriculture.