Before the upcoming elections, very few women had been participating on directly elected seats. The percentage of women winning on general seats has also been abysmally low and those who eventually won, usually belonged to affluent and politically influential class. Will this gender quota make a difference in making Parliament more gender balanced, meritocratic and democratic?

Islamabad: Parliamentarians, members of civil society and women’s rights activists all vehemently urged political parties to ensure effective implementation of 5% quota in awarding party tickets to women on general seats in the upcoming general election 2018, in accordance with Elections Act 2017.

They were speaking at the publication launch of “Making Gender Quota Meaningful”, organized and published by Heinrich Boell Stiftung at Serena Hotel. The authors, Rukhshanda Naz and Hasan Nasir Mirbahar, detailed the historical context of the gender quota as well as the legal framework for women’s political participation and highlighted potential issues and solutions.

According to the report, while women’s representation in Pakistan’s federal parliament has significantly increased in the past two decades, due to lack of implementation of the quota the full potential of the quota is still yet to be realised. Compared to only 1.8% of members in 1995, women accounted for an aggregate of 20.7% of the total membership of National Assembly and the Senate in 2015.

Speaking to intersectionality within women’s political representation, Country Director Heinrich Boell Stiftung Pakistan, Jacqueline Wilk commented on the need for including diverse profiles and perspectives on the gender quota and that gender democracy is a core component of hbs. She further acknowledged that women’s increased representation in Parliament is a global issue, as even in Germany only 34% is women representation.

The European Union Mission for election observation and monitoring was also presented at the launch and noted the importance of accountability for free and fair elections.

Moderating the event, Dr. Farzana Bari, a gender rights activist and academic, acknowledged that lack of gender representation is not only a Pakistan-specific issue but a global one sharing that only 23% women are in the World Parliament.

Ahmed representing NP, spoke to the importance of utilizing the gender quota effectively so in future elections, the country can move past just quotas and have organic equal political participation and representation.

Shahjehan, AWP commented on the flawed nature of mainstream politics which the quota is impacted by as well. “While we are appreciative of the affirmative action quota, our party before the Elections Act 2017 had planned to give seats to youth and women. Our party believes in the feminist agenda”, she expounded.

Nasir from PML-N implored foundations and NGOs to invest in the training of female politicians and candidates so they can be quality leaders in their communities. She also criticised rampant nepotism that takes place with some prominent female candidates where there male relatives are the ultimate decision-makers.

Zeb from QWP noted that her party focuses on KPK and Balochistan, she shared that she is a grassroots and middle class candidate who is optimistic to running on the quota as it has made her entry easier. She lamented that her constituency for not furthering the feminist agenda for gender quota enough.

Representing NP, Ahmed pointed out that PKR 30,000 is not possible for many individuals who wish to stand and that women campaigners often don’t have the same access to campaign funds and support as male counterparts or the same power in their area, so women are not able to run in their strongholds. She also noted that if class, religion and cultural representation is needed then male leadership needs to accept not only women but individuals from all walks of life for greater inclusivity in government and society.

Khawar Mumtaz, Chairwoman of the National Commission on the Status of Women offered the closing remarks and stressed that women’s socio-economic progress in the country is intrinsically tied to their representation and clout in politics. “This quota is a minimum legal requirement. It took ten years of sustained work for this quota to be established and was by and large, the result of women’s hard work. The previous government could not reach quorum without women candidates so every election has been a milestone in furthering women in politics”, said Mumtaz.

She also remarked that women have potential power as candidates and voters, but that women will not come out and vote in great volumes unless they believe voting will improve their lives. The chairwoman stressed that political culture needs to be changed within parties and women should not be token candidates but achieve a critical mass. 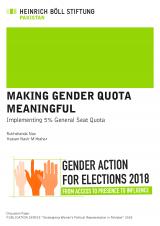 Moving beyond the minimum legal requirement for women in political parties to actual political representation and participation.