150 years of Germany’s abortion ban ‒ when will the “green tide” wash over to the other side of the Atlantic?

The “marea verde” – the “green tide” – has spread across the whole of Latin America. Can it make waves in Germany too?

Laws that offer no guarantees; bans that could very well be avoided. On both sides of the Atlantic it is the most vulnerable members of the population that suffer most from the criminalisation of abortion. But now a “marea verde” – or “green tide” – is spreading across Latin America. Can it make waves in Germany too?

According to a report by the Guttmacher Institute, an estimated 6.5 million abortions were performed in Latin America and the Caribbean each year from 2010 to 2014, with only a quarter of those under safe conditions. In 2014, probably at least 10 percent of all cases of maternal mortality resulted from unsafe abortions. This is the context in which the feminist struggle for the legalisation of abortion in the region has been taking place.

The movement emerged decades ago, but only gained real significance in 2005, when feminist groups in Argentina launched the National Campaign for the Right to Legal, Safe and Free Abortion. They march under the slogan “Sexual education to decide, contraception to avoid abortion, legal abortion to avoid death." The primary driving factor behind the demand for free and safe abortion is the urgent need to prevent needless deaths. The high death rate is inextricably linked to socio-economic factors. It has long been proved that individuals living in difficult circumstances are far more likely to suffer from gynaecological complications arising from clandestine, unsafe abortions. That makes a change to the law even more imperative, given the high poverty rates in Latin American countries.

Active feminist support groups and organisations, whose members include healthcare workers, have played a leading role in efforts to reduce the risks inherent in the gaping social divide. Such groups offer safe abortions in people’s homes. In Argentina, the network Socorristas en Red oversaw a total of 17,534 abortions in 2020 alone. 44.3 percent of those undergoing abortion had no paid employment. These figures underscore the fact that legal abortion is necessary if we are to achieve greater social equality. The introduction of a corresponding law would allow anyone with an unwanted pregnancy to exercise their right to an abortion without risking their life.

Laws on paper only

“I think we have a great challenge ahead of us; this will not be easy to apply,” said former Health Minister Ginés González García when the new law on the “voluntary interruption of pregnancy” was approved in Argentina. One of the main obstacles to the application of the law, and thus access to safe abortion, is the strong anti-abortionist lobby. In rural regions in particular, opponents of abortion put pressure on clinics and individual doctors to refuse to perform abortions, despite their legality. The growing influence of right-wing neo-conservatives around the globe is having a clear and present influence on political policies relating to sexual and reproductive rights. Recent years have seen increased numbers of human rights opponents pushing for the criminalisation of abortion under the guise of religious convictions. In Honduras, such groups persuaded Congress to pass constitutional reform that reaffirmed the country’s abortion ban, while in Poland the Constitutional Court placed further limitations on access to legal abortions.

Other difficulties include a lack of information on the one hand and inadequate material resources on the other. Again, these are inextricably related to socio-economic factors. On top of that is the social stigmatisation of individuals who have abortions. In contexts where religious dogma takes precedence over human rights, the significance of this point cannot be overstated.

Abortion in Germany – possible, but for whom?

Abortion remains a crime in Germany. It is, however, not impossible, although the process is onerous. According to a report by profamilia, in 2017 a total of 101,209 abortions were performed in Germany. But who is able to exercise their right to an abortion, and who is less able to do so?

An August 2020 survey of 120 immigrant women by the collective Ni una Menos Berlin found that these women face numerous obstacles. One of the problems is their precarious financial situation. Many immigrants have unstable employment and/or private insurance that only pays for gynaecological services in medical emergencies. As one of the survey respondents confirmed, this “makes it harder to get the pill and other contraceptives that are only available on prescription.”

Respondents referred repeatedly to the problem of a lack of information. Many of them expressed a desire for information about the various methods of contraception and possible courses of action in the event of an unwanted pregnancy. One respondent reported that when she asked her gynaecologist to explain what non-hormonal methods might be suitable for her after she had had very bad experiences with a Jaydess IUD, the doctor told her that there were no other options in Germany and she could offer no further advice.

Respondents also expressed a need for advice in other languages such as Spanish, French or Farsi; the language barrier continues to be a big problem for those who have not mastered German. Some respondents also reported experiencing discrimination from medical staff. They said they were treated like little children during routine examinations, when receiving advice on contraceptives and abortion, and even when giving birth.

And these are people who have approved immigrant status. The situation is far more desperate for those without a residence permit. They have no access to the healthcare system and thus experience double stigmatisation. One survey respondent who lived illegally in Germany for one and a half years reported that she had no access to healthcare during that time, and certainly not to information about reproductive justice and sexual health.

Can the “green tide” make its way across the Atlantic? 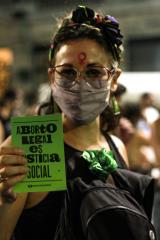 In 2018, for the seventh time, the National Campaign for the Right to Legal, Safe and Free Abortions asked the National Congress of Argentina to consider its Voluntary Interruption of Pregnancy Bill (Ley de IVE) – and this time it worked. By that time, people of all ages and at all levels of society had joined the struggle. Mass demonstrations enabled the movement to spread to all localities. Luiza Mançano, editor of the Brazilian newspaper Brasil de Fato, said that grassroots communication and feminist educational activities were largely responsible for the masses taking to the streets and for abortion getting established as a topic of public debate. The Argentine movement was supported by feminist groups and organisations from throughout Latin America. The campaign adopted the colour green, which has become an inspiring symbol of Latin American feminism.

When Congress approved the draft law in December 2020, Argentina became the fifth country in Latin America to legalise abortion, following Cuba, Uruguay, Puerto Rico and Mexico (although only in Mexico City and the state of). That crucial moment in Argentina offered a beacon of hope for people in the rest of the continent, encouraging them to continue their struggle with renewed vigour. The tide became a tsunami. In January 2021, feminists in Chile persuaded parliament to begin considering decriminalisation of abortion before the 14th gestational week, and on 28 April Ecuador made abortion legal in the case of rape.

Feminists across Latin America are uniting under the banner of the “pañuelo verde” or “green scarf". The people here are loudly and proudly protesting the fact that abortion is still not recognised as a human right, that women who get abortions are treated like criminals, that young girls are forced to become mothers, and that poor people – by no means the minority here – are the ones hardest hit by this human rights abuse. The protestors in green are fighting for legal and safe abortions that are free of charge, as well as for access to contraceptives and sex education.

15 May 2021 marked 150 years since the introduction of Section 218, the law banning abortion in Germany. News of the Latin American “green tide” has long since reached Germany. Whether or not it will have any influence on legislation here depends on whether our society can put aside individual privileges and focus on the good of the community instead. The struggle and successes of the Latin American feminist movement have shown that change is only possible when we join forces and address the everyday realities of all social groups.

Translated from Spanish into German by Beate Engelhardt, and from German into English by Todd Brown.